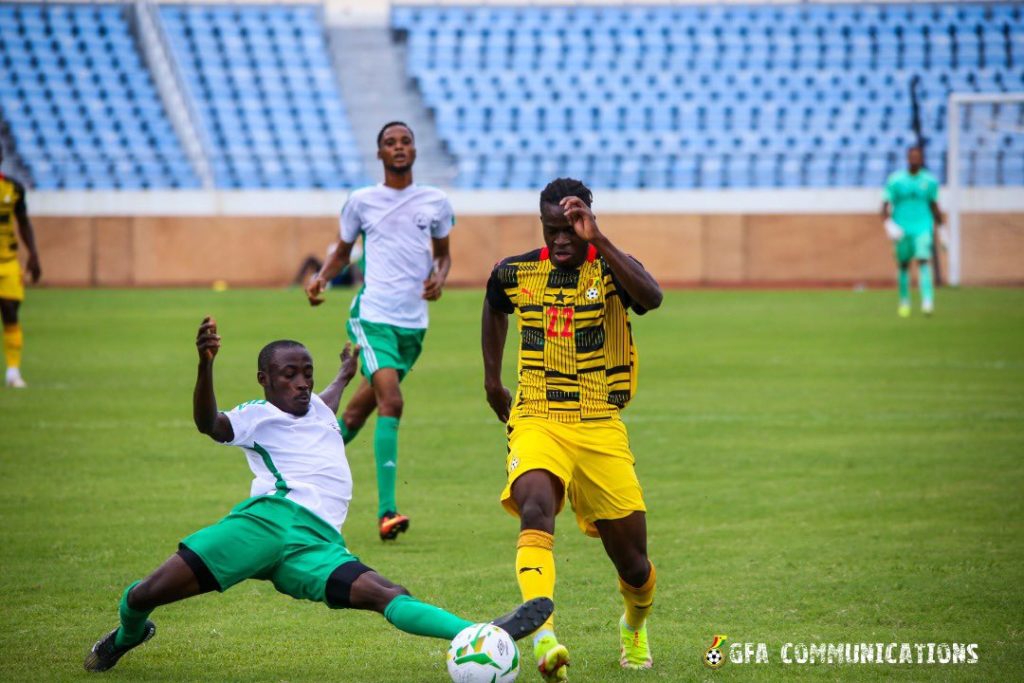 Ghana’s performance in their games against Ethiopia and South Africa was abysmal. The team secured a zero shot on target in their loss against South Africa in Durban.

Ghana’s next two games in the qualifiers against the Warriors of Zimbabwe could be a turning point for the team. It will be a chance for them to not miss out on another World Cup after failing to make it to the 2018 World Cup in Russia.

In Group G, the Bafana Bafana of South Africa is leading with four points. Ethiopia and Ghana are next on the table with three points apiece. Zimbabwe is at the bottom of the table with one point.

Let’s break down what could make or break the chances of the Black stars in their two games against Zimbabwe as they try to bring their qualifying campaign back on track.

1. The man behind the sticks

Ghana has struggled since the fading out of Richard Kingston to find a regular and consistent safest pair of hands for the team. The likes of Adam Larson Kwarasay, Fatawu Dauda, Stephen Adams, Razak Briamah have all at one point in time been trusted with being behind the sticks for the team but none has been able to make a huge claim for the position due to inconsistent performances.

Orlando pirates goal keeper and current deputy captain for the Black Stars, Richard Ofori has been the team’s safest pair of hands for a while now but recent string of injuries and unpardonable errors for both club and country is forcing technical handlers to look for stiff competition for the former WA All Stars shot stopper.

This is probably the reason why Swindon Town goal keeper Joseph Luke Wollacot was handed his first call up to the national team for the two qualifying games after his impressive start to the season for his side. He averaged a 0.8 goals concession for every 90 minutes he’s stayed on the pitch this season keeping four clean sheets in his 10 games this season for Swindon Town in the fourth tier of English football.

He’ll come up against FC St Galen’s Lawrence Ati Zigi, Hearts of Oak’s Richard Attah and Asanti Kotoko’s Danlad Ibahim for the position of Ghana’s goalkeeper in their two games against Zimbabwe. The decision on who will be given the nod to be in post for the Black Stars against the Zimbabwe is one that is crucial in the team’s success in these two games.

The center back position of the Black Stars can be said to be a position, which has not lacked quality and have enjoyed stability for a while now. Leicester City’s Daniel Amartey has brought a breath of fresh air to the position since his return to the team. Alexander Djiku of Stratsburg has also not put a foot wrong anytime he has been called upon. Jonathan Mensah has also proven to be reliable and coach Milovan will be counting on his experience especially as he’s only one of two players in the current team that he worked with during his first stint. Joseph Aidoo who played in the Laliga with Celta Vigo will also be looking to fight for a place in the starting lineup.

So the technical handlers will not be in short supply of quality at that position. The only headache will be which two will be good partners on the day.

The wingback positions are however a sharp contrast to the kind of quality and vast choice the team has at center back especially with the absence of Andy Yiadon at right back due to injury. The only player available for that position now is Dream FC’s Philimon Baffour who’s selection in the team caused a lot of controversy on social media.

This is mainly due to his close links with the FA president Kurt Okraku and the fact that he has been inactive since the Ghana premier league ended in July. His recent call up to the team is the fourth time for the 20 year old but he’s yet to make an appearance probably due to stiff competition from number one choice Andy Yiadom.

When the position became vacant however; during Ghana’s trip to South Africa, when Andy Yiadon couldn’t travel with the team due to Covid-19 restrictions, Hearts of oak’s captain Fatawu Mohammed was handed a late call up and was used ahead of Baffour in that game. Baffour since then has still not played any active football but has still been favored ahead of someone like Fatawu Mohammed who is actively playing for Hearts of oak in the champions league. In a must win game against the warriors of Zimbabwe, it will certainly be a risk using an inactive and inexperienced Philimon Baffour.

Baba Rahman and Gideon Mensah are the two options available at the left wing back for the team. Although Reading’s Baba Rahman has enjoyed playing time in recent games for the Black Stars over Gideon Mensah, his performances especially in the game against Ethiopia in Cape Coast left much to be desired.

The modern game requires that wing backs provide helping hands in attack to attackers especially if a team struggles to break an opponent from the middle of the pitch. Good wing backs are able to stretch the defense of opponents thereby creating spaces to be exploited. Ghana currently lacks that and that has contributed to the goal scoring woes of the team.

The wing backs who will be selected for Saturday games should not only be defensive minded but should also be able to contribute to the attack of the team in order to increase the team’s chances of scoring.

Based on Ghana’s two games against Ethiopia and South Africa, the team struggled to create any meaningful opportunities that could threaten their opponents. In fact Ghana recorded a zero shot on target against South Africa and had to rely on a goal keeping error to win against Ethiopia. To compound Ghana’s goal scoring woes is the current dip in form of Jordan Ayew for both club and country. He’s managed only one goal in 45 games.

Ghana will need a proper attacking plan against the warriors if they should have any chance of picking all six points in the two games. The current form of winger Kamaldeen Sulleyman should be something the team could count on.

Also, the presence of Kudus Mohammed and Arsenal’s Thomas Partey in the team after their absence from the games against Ethiopia and South Africa due to injury should add more attacking bite to the team. The warriors of Zimbabwe might be expected to sit back and catch Ghana on the counter so the team must work on a plan that can break a resilient defensive plan of the warriors.

The head to head record between Ghana and Zimbabwe has Ghana winning on three occasions and losing once and two games ending in a stalemate out of the six meetings.

The last official meeting between the two sides was in the last group game at the 2006 AFCON in Egypt where the warriors defeated Ghana by 2-1. The warriors had already been eliminated from the competition after losing to Senegal and Nigeria and their earlier group games. Ghana needed a draw to qualify ahead of Senegal but a spirited team performance from Zimbabwe made sure Ghana got eliminated together with them from the group.

The Warriors of Zimbabwe might not be favorite to qualify out of the group, but as they did in 2006, they could once again cause a stir and damage Ghana’s chances of topping the group and qualifying to the final stage of qualifiers if the Black Stars fail to get their acts together.