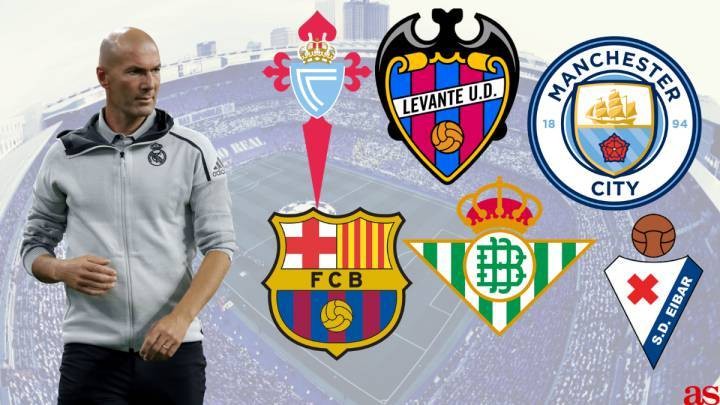 Zidane's men will play seven games between now and March 17 with the results from these respective fixtures instrumental in outlying the season for the Bernabéu side.

After a mid-week of inactivity due to Copa del Rey elimination at the hands of Real Sociedad, Zidane's men go into a stage of the season with a hectic schedule imminent and the respective results of games between now and mid March will go some way in shaping the level of success for the Bernabéu club this season.

The visit of the struggling Galician side should, at least on paper not pose a major headache for Zidane's side who will point to the last two visits of Celta to the Spanish capital where comprehensive 2-0 wins last year and a 6-0 romp the previous season will have home fans confident that the intense run of games will start in a positive manner.

Away trips to the Cuitat de Levante Stadium are never easy as Barcelona found out both this season and last with the Catalan side on the receiving end of 3-1 and 5-4 and despite stuttering in recent weeks, "Els Granotes" always offer stern opposition when facing the Bernabéu side. A solid and injury free performance form Zidane's side is imperative.

A tie filled with narratives and sub-plots wherever you look. Guardiola back at the Santiago Bernabéu, City apparently destined to be banned from the competition for the next two seasons and the English side anxious to remedy their 2016 exit at the hands of Madrid. Big European nights at the Chamartin are special and Zidane will want to ensure that there are no slip-ups or nasty shocks in the first leg of the tie.

After a 0-0 draw at Camp Nou in December, incidentally a result and performance from the Catalan side that was instrumental in the subsequent dismissal of Ernesto Valverde, Madrid will hope that the March El Clasico finally offers an opportunity to address poor recent Bernabéu results against their old foes. October 2014 was the last time that the men in white ran out victorious in a home game against Barça with 0-4, 2-3, 0-3 and 0-1 the last scorelines between both giants of the Spanish game in the capital in LaLiga.

Another tricky away trip facing Zidane's side a week after El Clasico with the Andalusian's already claiming a 0-0 draw in the home fixture this season. Recent trips to the Benito Villamarin have been kind to Madrid in recent times with the last visits to the Seville ground providing maximum points for the side from the capital.

The visit of the Basque side should fail to stretch Real Madrid as Mendilibar's men have struggled this season and are currently flirting with relegation. In their six seasons in the top flight Eibar have only managed one win over Madrid (November 2018 at Ipurua) and in their duels at the Bernabéu, all games bar one have ended in a home win with February 2016's 1-1 the exception.

The final installment in a hectic schedule with progression in Europe's premium competition and the quest for a 14th European Cup set to be decided in the Etihad Stadium in Manchester.