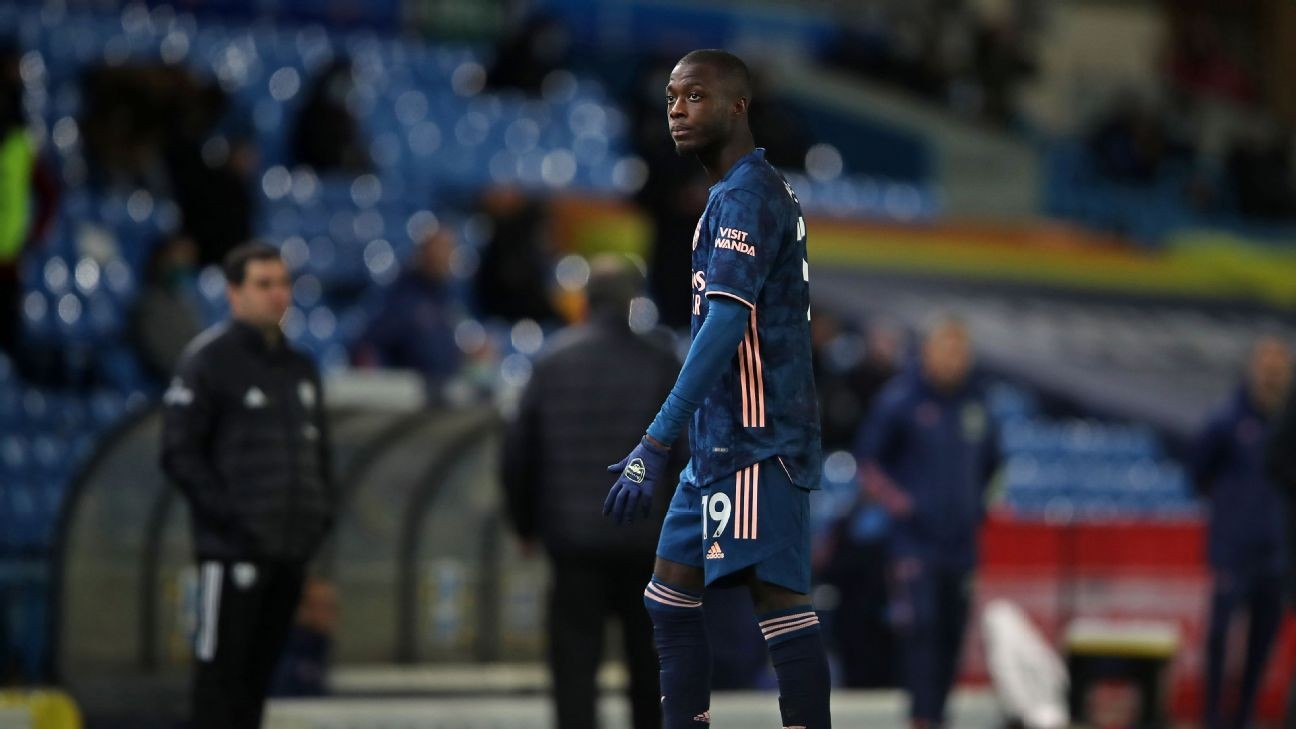 Ten-man Arsenal recorded only their second draw in 22 games as Mikel Arteta's side played out a goalless draw with Leeds United in the Premier League at Elland Road on Sunday.

The Gunners found themselves on the back foot for large spells, and things got even tougher when Nicolas Pepe was shown a straight red card for naively headbutting Ezgjan Alioski. That spurred on the hosts, and Rodrigo rattled the bar before Patrick Bamford and Raphinha each hit the post. Arsenal's best chance saw Bukayo Saka denied by an outstretched Illan Meslier at the other end, as he rounded the keeper following an efficient counterattacking move, but a fascinating contest ended 0-0.

They were some way off their best, but to their credit, Arsenal produced a defensively astute display for the most part as they extended an unbeaten run at Elland Road that now spans more than 20 years.

Arteta has certainly transformed Arsenal into a more organised outfit during his short tenure as boss, but the Gunners created little in a frustrating afternoon's work that was epitomised by Pepe's foolish -- and avoidable -- sending off.

6 -- Arteta had to make do without David Luiz, but his side coped well in the face of another energetic Leeds performance. With that said, creativity was lacking until Saka's introduction.

GK Bernd Leno, 7 -- The Germany international imposed himself well in the early stages and showed superb reactions to first keep out Bamford's close-range volley and later a stinging drive from Stuart Dallas, though the woodwork rescued him on three occasions.

DF Hector Bellerin, 6 -- Back in familiar territory on the right of a back four, the 25-year-old produced a vital defensive header to nod away a deep cross as Leeds really started to threaten, but he struggled against the tireless Jack Harrison.

Arteta to sniff out mole who leaked David Luiz fightFor Arteta and Arsenal, the honeymoon may be overAuba, Gabon team forced to sleep on airport floor

DF Rob Holding, 6 -- Probably a busier outing that he would have liked, but he was in the right place at the right time to hammer the ball away to safety with Bamford again causing problems.

DF Gabriel, 6 -- The defender was fortunate to see a couple of half-clearances come to nothing as Bamford and Dallas failed to capitalise, although he did just about enough to distract the former with the Leeds striker lurking at the back post.

DF Kieran Tierney, 6 -- A memorable week for the Scotland international, as his country qualified for the European Championship, but he found attacking freedom limited against a Leeds team that moved the ball quickly and tidily, but he stuck to his defensive duties well in a decent display.

MF Dani Ceballos, 6 -- Sprayed an early cross-field ball straight out of play for a Leeds throw, but his next involvement showed much more promise as the Real Madrid loanee unleashed a thumping effort that rattled the side netting. Beyond that he worked hard and was one of his side's better performers.

Nicolas Pepe's sending off left Arsenal shorthanded for most of the second half in their scoreless draw at Leeds. MOLLY DARLINGTON/POOL/AFP via Getty Images

MF Granit Xhaka, 6 -- A tireless display from the Switzerland international, who snuffed out a number of dangerous pull-backs towards the edge of the penalty area, but he was nearly punished for showing Rodrigo the inside as the striker hammered the bar.

MF Nicolas Pepe, 3 -- You just get the feeling that we haven't really seen the best of him yet, but he almost crafted something from nothing when his miscued cross from the left clipped the crossbar. He was unforgivably dismissed for losing his cool in a heated exchange with Alioski.

MF Joel Willock, 4 -- A big opportunity for the midfielder, but one he didn't really grab with both hands, and the 21-year-old was replaced by Saka as the game approached the hour mark.

MF Willian, 5 -- Plenty of endeavour from the Brazil international, but he struggled to impact a contest in which Arsenal failed to keep hold of the ball for large spells against an unrelenting Leeds attack and he was withdrawn at the interval.

FW Pierre-Emerick Aubameyang, 6 -- The Gabon star looks desperate to rediscover his former ruthlessness, but chances were hard to come by in a cagey affair and he thrashed his best opportunity high and wide.

MF Reiss Nelson, 6 -- Brought on for Willian at half-time, Nelson couldn't help his side move up a gear, a task that was always going to be a challenge after Pepe's dismissal.

MF Bukayo Saka, 7 -- His introduction certainly gave Leeds something to think about. He wasted no time in picking out Aubameyang for the Gunners' first shot on target before a wonderful run and turn saw him burst away from his marker, although he perhaps should have done better as he looked to round Meslier.

DF Ainsley Maitland-Niles, N/R -- Replaced another Arsenal substitute when Saka limped off in stoppage time, but he didn't have much time to get involved.