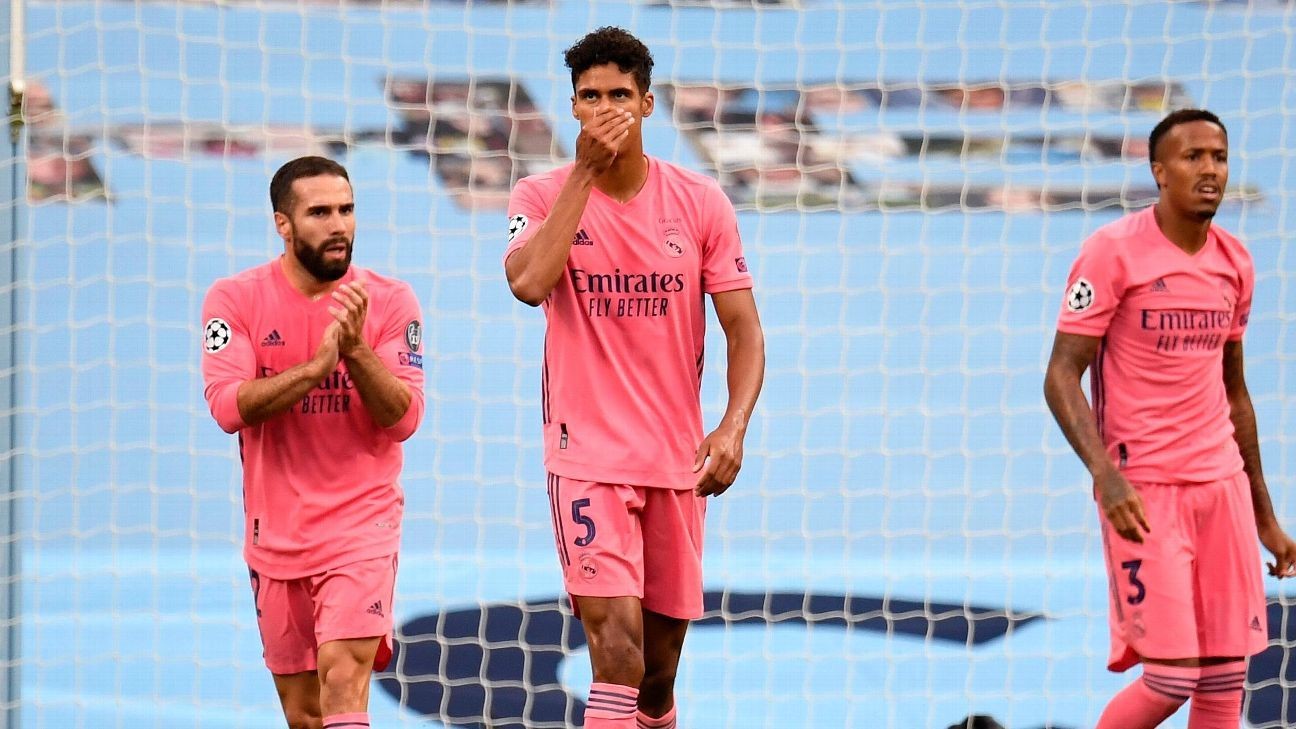 A goal from Karim Benzema wasn't enough to stop Real Madrid from being knocked out of the Champions League as a 2-1 defeat at Manchester City saw them eliminated 4-2 on aggregate in the round of 16.

Madrid went behind early when Raphael Varane was caught on the ball by Gabriel Jesus, who passed to Raheem Sterling for a straightforward finish. Benzema and Eden Hazard both had shots saved by keeper Ederson before the French striker levelled with a header from Rodrygo's cross.

Thibaut Courtois saved well from Sterling and De Bruyne after the break but could do nothing about another Varane mistake with 20 minutes left, as Jesus reacted quickest to the defender's weak header back to Courtois.

Real Madrid's Champions League exit will enable their players to rest while La Liga rivals Atletico Madrid -- and possibly Barcelona, if they knock out Napoli on Saturday -- have games to play next week. It has been a long, exhausting season and while elimination hurts now, it might prove beneficial when the domestic season resumes in September.

Otherwise, Benzema continued the goalscoring form that saw him recognised as La Liga's outstanding centre-forward this campaign, and Rodrygo, while mostly quiet, delivered a moment of outstanding quality in providing the cross for the equaliser.

Iker Casillas proves Rocky correct over 21-year career: Life is all about getting back upBale didn't want to play for Real vs. City - Zidane

City's attack caused Madrid problems -- Raheem Sterling in particular, with his intelligent movement -- but much of the visitors' trouble was of their own making. Two uncharacteristic, basic errors from Raphael Varane cost them dearly. A player of Varane's experience should know better than to be caught out as he was by Gabriel Jesus for the first goal, and his second-half error was just as unforgiveable. Varane is an excellent player, but this was a bad, bad night for the Frenchman.

6 -- Zinedine Zidane had never before experienced Champions League elimination as a coach -- winning it in 2016, 2017 and 2018 and returning in the wake of last year's Ajax defeat - and this result will sting, even if Madrid's La Liga title is quite a consolation.

The manager picked a surprising starting XI, with three forwards included when he often opts for a 4-4-2 against the best teams. It was an attacking move with Madrid needing to win and to score at least twice to progress. They weren't able to do so, but Zidane can't be blamed for the manner of the defeat.

GK Thibaut Courtois, 8 -- Made a number of very good saves -- from Rodri in the first half, twice from De Bruyne's corners, from Sterling after half-time and Jesus after that -- and there was nothing he could do about City's opening goal, although he perhaps could have reacted faster for their second.

DF Dani Carvajal, 7 -- A reliable big-game performer. Carvajal was up against Jesus for much of the game and wasn't as guilty as his defensive partners for the lapses that cost the team.

DF Eder Militao, 6 -- Filled in for the suspended Sergio Ramos, and the difference in quality and, crucially, authority was noticeable. Blocked an early shot from De Bruyne and did his best to do the same for Sterling's goal.

DF Raphael Varane, 4 -- Supposed to lead the defence in Ramos' absence, but was badly at fault for both City's opener, dawdling on the ball before being robbed by Jesus, and then for their second. To his credit, he admitted to his mistakes afterward: "This defeat is mine. I have to accept it. I take responsibility. We had prepared well but you pay for mistakes at this level. I can't explain it. It happens in football. It's a difficult night for me. I'm sorry for my teammates. I'm sad."

DF Ferland Mendy, 6 -- Picked ahead of Marcelo, as has often been the case in big games this season. Couldn't get forward as much as he has in La Liga, with Sterling to contend with.

MF Casemiro, 6 -- Madrid's most important player in this kind of game. A superb slide tackle dispossessed Sterling in the first half after the winger had danced through the Madrid defence and looked to be in on goal.

The normally excellent Raphael Varane was culpable for both of Manchester City's goals on Friday in the Champions League. Getty

MF Toni Kroos, 6 -- Left out for the first leg, but was always going to start here. Unable to dominate possession as he tends to, against City's technical midfield.

MF Luka Modric, 6 -- One of Madrid's best players since football resumed in June and had his moments in the first half, but faded as the game went on.

FW Eden Hazard, 6 -- Injured when the teams met in February, before returning to play a minor role in Madrid's La Liga win. Looked brighter in the first half, getting some early touches and having a shot saved by Ederson, but quickly tired.

FW Rodrygo, 7 -- A gamble from Zidane -- the young Brazilian didn't even make the bench for the first leg -- but the coach likes his work rate and dynamism out wide. His first intervention was a superb cross for Benzema's goal. Taken off after an hour.

FW Karim Benzema, 8 -- Had a first-half shot well-saved by Ederson before scoring with the header, his fifth Champions League goal this season.

FW Marco Asensio, 6 -- Replaced Rodrygo with an hour played but barely made an impact.

MF Federico Valverde, N/R -- Madrid could have done with his energy earlier in the game.