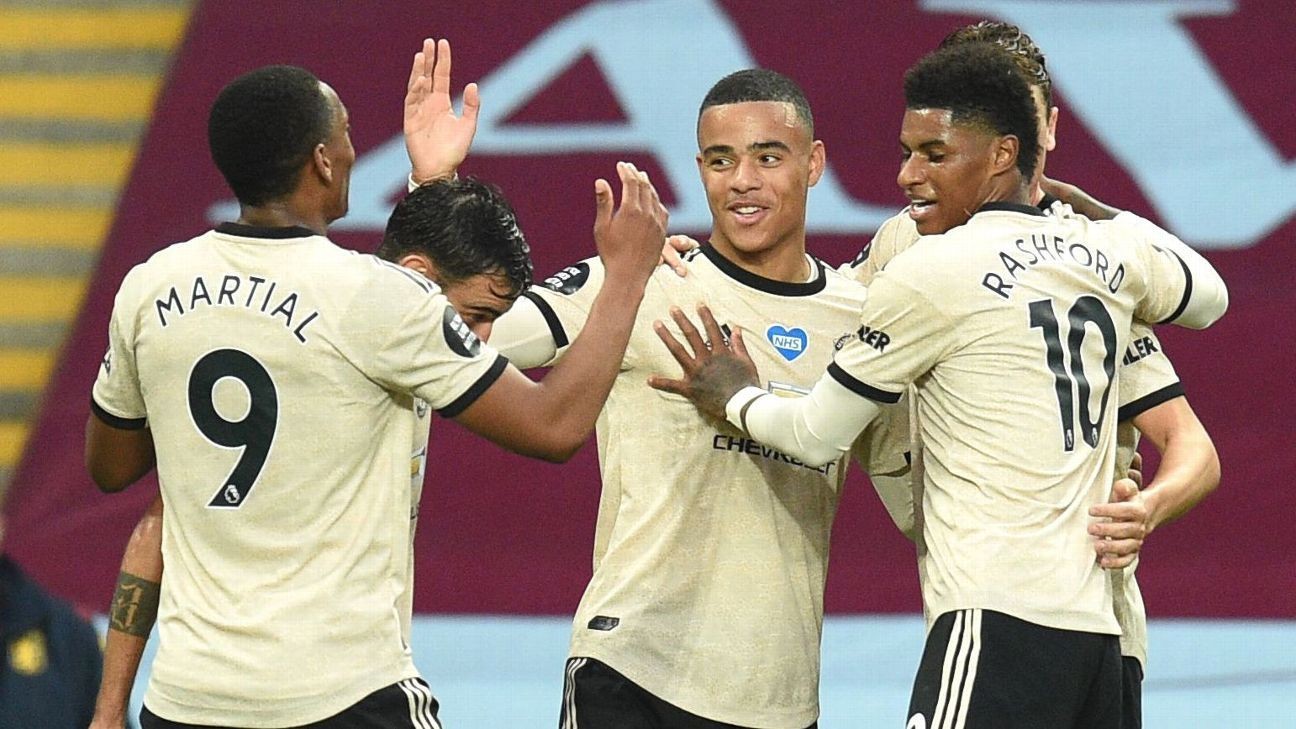 Manchester United brushed aside relegation-threatened Aston Villa 3-0 to move within one point of fourth-placed Leicester City.

Ole Gunnar Solskjaer's side extended their unbeaten run to 17 games thanks to a Bruno Fernandes penalty and goals from Mason Greenwood and Paul Pogba at Villa Park. Greenwood scored the second in first-half stoppage time before Pogba made sure of the points with a well-placed finish from the top of the box, his first United goal since April 2019.

After a slow start from United, Fernandes scored from the spot when referee Jon Moss awarded a contentious penalty following a challenge on the Portuguese midfielder from Ezri Konsa. Greenwood scored the second in first-half stoppage time with a thunderbolt before Pogba made sure of the points with a well-placed finish from the top of the box for his first United goal since April 2019.

Greenwood will still be a teenager for another 15 months but he is closing in on 20 goals this season. His 16th of the campaign here was with his weaker foot -- his right -- but you wouldn't have known the way it was rifled past Pepe Reina from 20 yards. The Villa defence helped out by failing to close him down but Greenwood still delivered a quality finish. With four goals in his last three games, he's in the best form of his very short senior career.

Solskjaer will be pleased with the result but he will not have been thrilled with the start his team made at Villa Park. They were slow out of the blocks and until the penalty on 27 minutes, Villa were the better team. United gave away too many silly free kicks around their own box and were sloppy on the ball before taking control of the game right before the break.

7 -- Ole Gunnar Solskjaer picked the same team for the fourth Premier League game in a row and unless there are fitness concerns he has no reason to change when Southampton visit Old Trafford on Monday. United have four games remaining and in this form, you wouldn't bet against them winning all four and clinching a place in the top four.

GK David De Gea, 7 -- Made his 399th United appearance to surpass Peter Schmeichel, as Villa could only muster one simple shot on target.

DF Aaron Wan-Bissaka, 6 -- Got caught under a cross to the back post to allow a chance for Jack Grealish. Should have had his first United goal with a diving header.

DF Luke Shaw, 7 -- Clipped an inviting cross into the penalty area but Fernandes could only head over the bar.

DF Victor Lindelof, 6 -- Overcame a back injury to start and Villa never did enough to test his fitness.

DF Harry Maguire, 6 -- Didn't have a good game against Bournemouth last time out but was never troubled here.

MF Nemanja Matic, 7 -- Had to deal with Villa danger man Grealish and kept him quiet before going off early with the game already won.

MF Paul Pogba, 8 -- Dispossessed in midfield before Trezeguet hit the post with the score at 0-0. Guided in the third goal from outside the penalty area to score his first United goal for more than a year.

With 16 goals and counting in his 18-year-old season, the sky is the limit for Man United's Mason Greenwood. Getty

MF Bruno Fernandes, 7 -- Clever turn on the edge of the box to win the penalty and then tucked it away himself. Picked out Pogba with a perfect pass from a corner routine for the third goal.

FW Mason Greenwood, 8 -- Played a key role in the build-up to the penalty award and smashed in United's second from the edge of the box.

FW Marcus Rashford, 7 -- Some smart skill and a good cross to create the golden chance for Wan-Bissaka at the back post.

FW Anthony Martial, 7 -- Did brilliantly to out-muscle Tyrone Mings to win the ball before Greenwood made it 2-0. Hit the underside of the bar in the second half.

MF Scott McTominay, 6 -- Enjoyed a stroll for half an hour after replacing Matic.

DF Brandon Williams, 6 -- Plenty of energy on the right in a strong substitute appearance from the youngster.

FW Odion Ighalo, N/R -- No chances or goals this time for the Nigerian.

FW Daniel James, N/R -- Looked lively to be back on the pitch but he's not going to displace Greenwood with the scintillating form the latter is in at the moment.