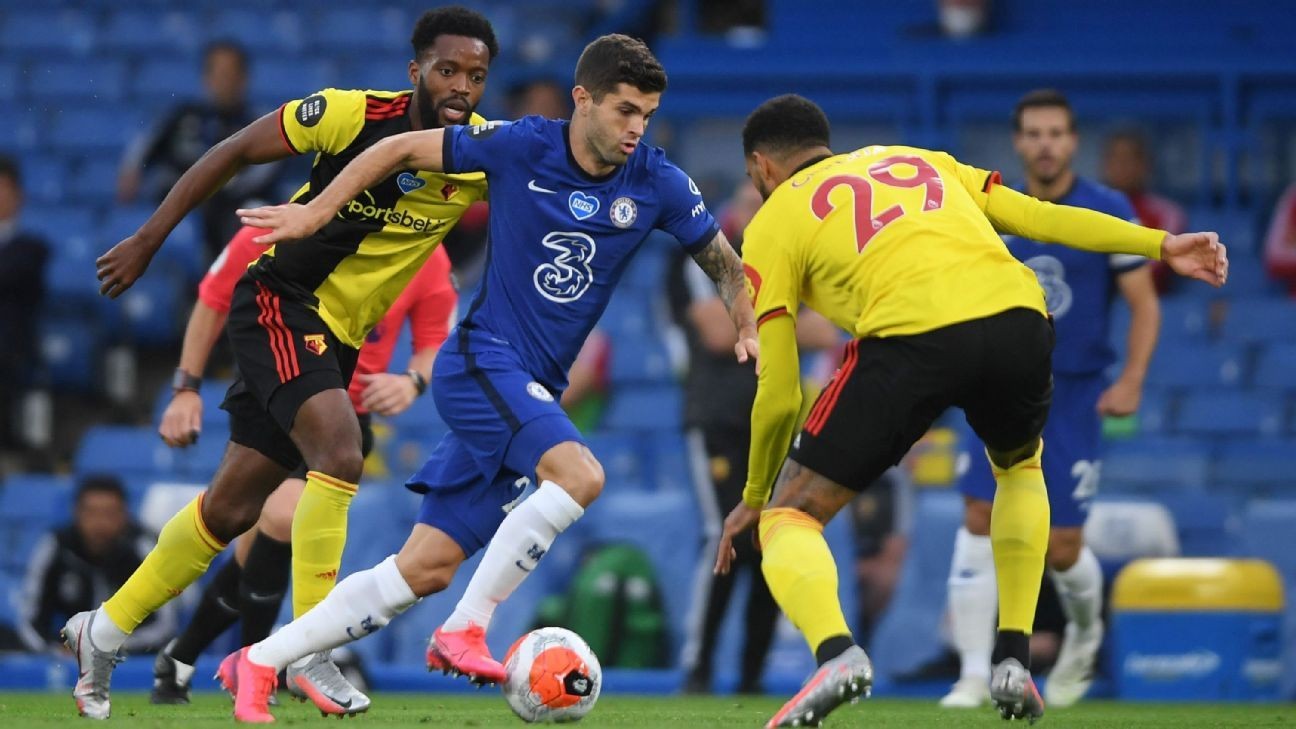 Chelsea put the ghost of West Ham behind them as they registered a comprehensive 3-0 win over Watford at Stamford Bridge on Saturday, maintaining their fourth place in the Premier League table.

Olivier Giroud put Frank Lampard's men ahead with a tidy finish just before the half-hour mark, with Willian making it two from the penalty spot just before half-time. In second-half stoppage-time, Ross Barkley put the cherry on top with a powerful rocket that sailed into the roof of the net.

It felt as if there was a consistent pattern and structure to Chelsea's game that we haven't seen since the restart. They balanced their methodical build-up play with quick one-two passes and surging runs. In the midst of all that, they were more than happy to drop deep and see what the Hornets could offer them at the back. In truth, the hosts didn't really even have to get out of first gear.

There's always going to be a lingering threat of complacency from a defensive standpoint for the Blues, and while it didn't quite come to bite them on this night, there are too many moments in which their experienced stars and their youngsters, in equal measure, show poor judgement on the ball. If they're going to push for the title next season, they need to learn that communication is key.

8 -- Lampard knew he had to try to make a statement in this game, and going with a confident 4-3-3 with two attacking No. 8s and a holding midfielder was quite the way to get things started. It was a strong attacking lineup from the word go, with the manager relying on his experienced players, in a move that seemed to pay off. He really did seem to get his point across after the first drinks break, too, emphasising his continued growth in the man-management department.

GK Kepa Arrizabalaga, 6 -- There are still some obvious nerves there when he comes forward to claim the ball, but courtesy of a weak Watford display, he didn't have all too much to worry about.

DF Reece James, 5 -- There are some possible fitness issues that need to be looked at closely with James as he looked slow and occasionally clumsy with a string of needless errors.

DF Andreas Christensen, 7 -- The Dane's no-nonsense approach is something to behold at times, and thankfully for the Blues, he shook off the early cobwebs before putting in a pretty confident display.

DF Kurt Zouma, 8 -- It was a really strong day at the office for the centre-back as he bullied Watford's forwards, played the ball out from the back with ease and showed a composure that fans haven't seen in months.

DF Cesar Azpilicueta, 6 -- "Solid" is the word that comes to mind when thinking of Azpilicueta, but between his hopeful crosses and tendency to drift out of position, he doesn't feel like captain material.

MF Ross Barkley, 7 -- After second guessing himself on multiple occasions in the first 20 minutes, he provided a nice assist for the opening goal before smashing in his side's third of the evening.

MF N'Golo Kante, 6 -- The former Leicester man was often caught in two minds between holding the line and edging into Watford's half, but in the end, he improved as the game went on and fans will hope his injury isn't too serious.

Once again, Christian Pulisic was among Chelsea's most creative options and earned his side another penalty. Getty

MF Mason Mount, 7 -- The distribution of Mount can be one of Chelsea's most important assets when he plays to his full potential, as he did here after playing a vital role in the opener.

FW Willian, 8 -- He took a while to warm up but when he did, Willian showcased some great link-up play, intricate passing and top finishing for the penalty.

FW Olivier Giroud, 7 -- His pace may be lacking these days and his touch isn't always on point, but the Frenchman's impeccable timing was on full display as he slotted home the opening goal.

FW Christian Pulisic, 8 -- The U.S. international is filling the void left by Eden Hazard nicely with seamless runs and a phenomenal ability to turn his marker. He also won the penalty after turning Etienne Capoue inside out just before half-time.

MF Ruben Loftus-Cheek, N/R -- Served as a steady presence in the middle of the park to help the minutes tick by towards victory.

MF Billy Gilmour, N/R -- His vision on the ball continues to harm his development in another questionable cameo for the youngster.

FW Callum Hudson-Odoi, N/R -- The 19-year-old looked hungry but needs a full run of games under his belt in this team to really make an impact.

FW Tammy Abraham, N/R -- Held the ball up well but didn't get that one golden opportunity he needed during his 20-minute spell on the pitch.