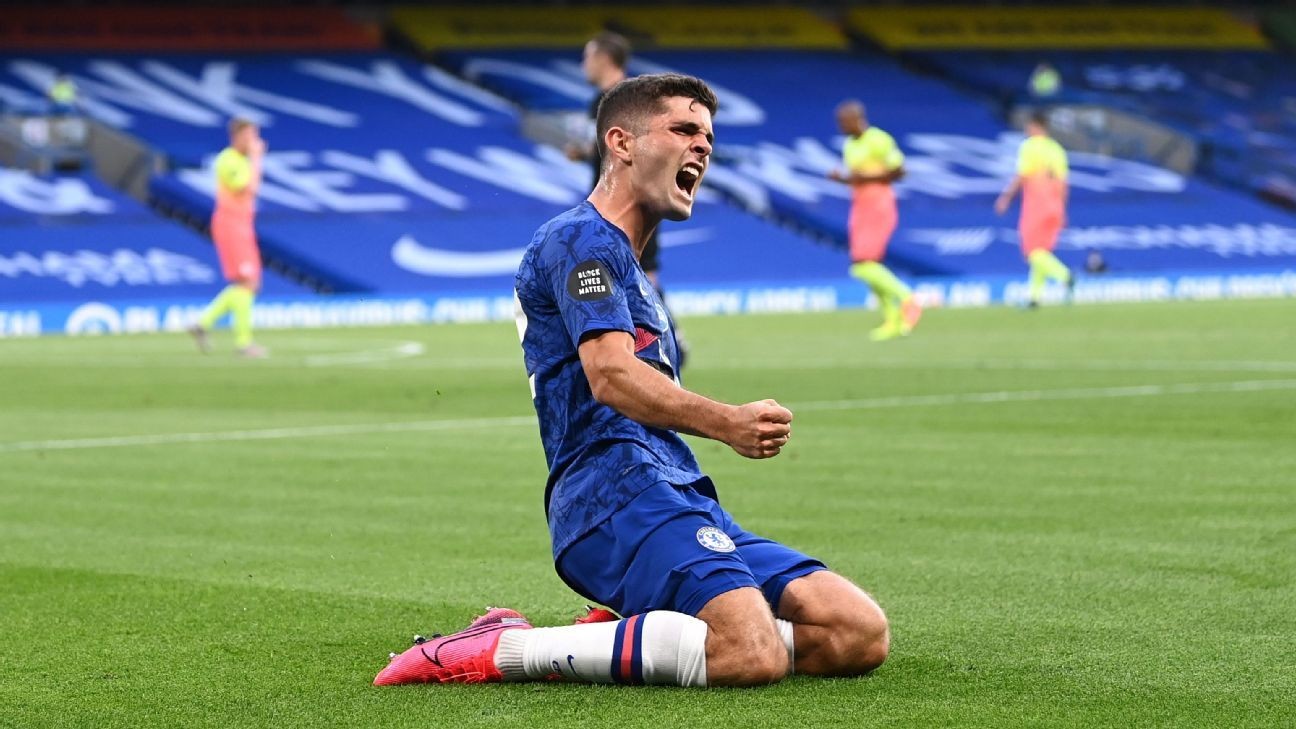 Christian Pulisic -- once a Jurgen Klopp signing at Borussia Dortmund -- struck the opener when he burst free on the counter-attack and calmly placed the ball past Ederson. Kevin De Bruyne levelled with a spectacular free kick before a wild few minutes in which Raheem Sterling hit the post and Pulisic saw an effort remarkably cleared off the line by Kyle Walker.

Another goalmouth scramble led to the home side's winner. After Fernandinho was shown a straight red card for handling Tammy Abraham's goalbound shot, Willian stepped up to dispatch emphatically from the penalty spot, sending Chelsea -- and Liverpool fans -- into raptures.

- ESPN+: Stream FC daily (U.S. only)
- What did you miss? The latest from Europe's top leagues

Chelsea might have ridden their luck at times but were rewarded for their efficiency in front of goal. They have held the chasing pack at bay and have piled pressure onto Leicester by closing the gap on third place to just one point.

If home advantage is still something of an influence in the absence of supporters, Chelsea did not make it count for the opening half an hour when they were under plenty of pressure. Meanwhile, Olivier Giroud struggled to have any influence and was unsurprisingly substituted on the hour

6 -- Frank Lampard was renowned for his tenacity in midfield as a player and there was plenty of that to be seen in the performances of Ross Barkley and Mason Mount. Make no mistake, this was a big victory.

GK Kepa Arrizabalaga, 5 -- He almost gifted the visitors a goal with a clearance that didn't clear the head of Raheem Sterling, but later redeemed himself by tipping Fernandinho's glancing header over the bar. Kepa was well beaten by De Bruyne and thankful to see a Sterling shot clip the post.

DF Cesar Azpilicueta, 6 -- The skipper was kept on his toes early against a City side that lacked a natural striker but was packed with pace. Sterling and Benjamin Mendy asked plenty of questions, but Azpilicueta just about came through unscathed.

DF Andreas Christensen, 6 -- The centre-back showed excellent composure to get his body across Sterling's path and shepherd the ball out of play, and later threw his body at Mendy's thumping strike. Christensen was also close to opening the scoring with a powerful header that was beaten away by Ederson.

DF Antonio Rudiger, 6 -- Chanced his luck a little when he allowed Mendy's teasing cross from the left to run across his body, but City player had gambled on the delivery. Rudiger survived a VAR check when, stretching, he dealt De Bruyne a painful blow on the leg.

DF Marcos Alonso, 6 -- The full-back was confined to his own half for large spells, but took the chance to charge upfield when he could and almost crafted a goal with a low cross from the left that presented Barkley with the chance to strike at goal.

MF Ross Barkley, 7 -- The former Everton man did well to centre for Pulisic after finding space on the left and had a shot blocked by Fernandinho after good work from Alonso.

MF N'Golo Kante, 6 -- A typical performance from the battling midfielder, who was once again a vital cog, but he was guilty of tripping Mahrez and that allowed De Bruyne to level with a superb free kick.

MF Mason Mount, 7 -- He covered so much ground, was involved in some telegraphed link play with Barkley and always willing to put in the hard yards to steal back possession when his side were under pressure. Came close to scoring at 1-1, but could only rattle the side netting.

FW Willian, 8 -- Regardless of where his future lies, the Brazilian international put in an excellent display. His highlight came after he beat De Bruyne to cross from the right, which led to chaos in the penalty area and, eventually, the penalty from which he hammered home the winner.

FW Olivier Giroud, 4 -- Kept his place after impressing at Aston Villa, but his involvement against City was spectacularly unspectacular. Giroud produced a lovely turn at one point, only to whip the ball out of play on the left flank. It summed up his night.

FW Christian Pulisic, 8 -- Opened the scoring with a superb break from his own half that ended with a composed finish. He came within inches of grabbing himself a second in similar fashion, this time rounding Ederson, only for Walker to block the ball on the goal line.

FW Tammy Abraham, 7 -- On for Giroud, Abraham was a catalyst for action in the City penalty area. He saw a close-range effort superbly saved by Ederson before Fernadinho blocked the follow-up effort with his hand. VAR spotted it to set up Willian's winner.

MF Mateo Kovacic, NR -- Replaced Barkley and did not have much opportunity to make an impact, but helped his side over the line nonetheless.

MF Billy Gilmour, NR -- Replaced Pulisic in stoppage time and almost had an immediate impact as he played in Pedro who fired just wide.

FW Pedro, NR -- Replaced Mount in stoppage time and almost added a third with a whipped effort from the left that was pushed wide.