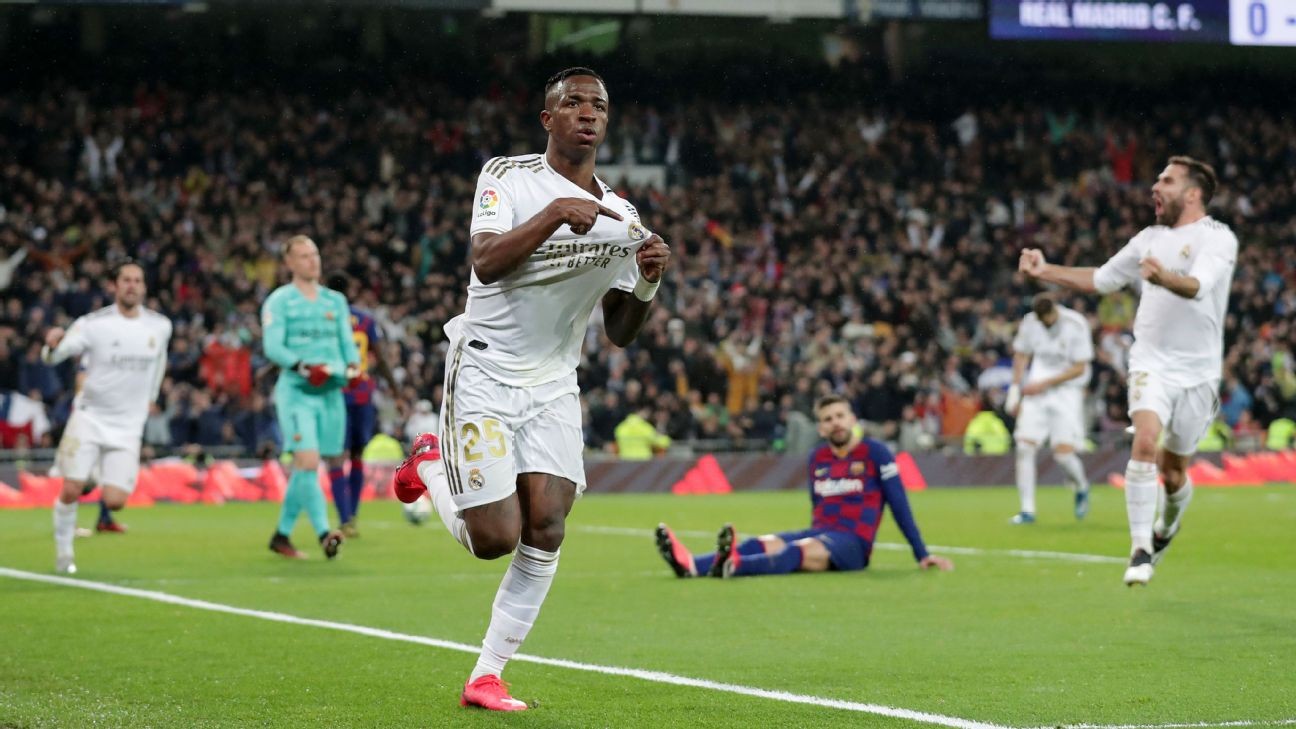 Vinicius Junior and Mariano Diaz scored as Real Madrid beat Barcelona 2-0 in El Clasico on Sunday to go a point clear of their rivals at the top of the La Liga table.

Barcelona had the better first-half chances and Thibaut Courtois saved well from Arthur and Lionel Messi. Real Madrid improved after half-time, as Isco had a curling shot tipped over by Marc-Andre ter Stegen and a header cleared off the line by Gerard Pique. The opening goal came in the 71st minute, Toni Kroos finding Vinicius on the left to shoot past Ter Stegen with the help of a deflection off Pique, before Mariano grabbed a second in added time to seal the win.

How long does it take to go from full-blown crisis to table-topping euphoria at Real Madrid? Ninety minutes plus stoppage time at the Bernabeu. When referee Antonio Mateu Lahoz blew the final whistle, this stadium erupted. A Clasico victory, and all is right in the world.

The title is not decided on March 1 -- there are 12 league games still to be played, and there will be more twists to come -- but this felt like more than just three points. Madrid ended an appalling recent Clasico record - a first win in this fixture since 2017, ending a run of four Bernabeu victories for Barca -- and they did so with a hugely impressive second-half performance.

Barcelona were the better team in the first half as they kept the ball to an extent rarely seen from a visiting team at the Bernabeu. It was a reminder that Zinedine Zidane's record against Quique Setien's teams has been mixed -- a 3-3 draw with Las Palmas and two wins for his Real Betis stick in the memory -- and before the interval Madrid struggled at times, with Courtois making some important saves.

8 -- Zidane made just two changes from the team that lost 2-1 to Manchester City in midweek. One was no surprise at all -- Kroos returned to midfield as expected -- but the selection of Marcelo at left-back was a shock. The Brazilian has spent most of the season out of form but did not look out of place on the night, justifying Zidane's pick. The coach's decision to leave out Luka Jovic entirely and pick Mariano was vindicated too, with the striker coming off the bench in added time to score Madrid's second.

GK Thibaut Courtois, 8 -- Real Madrid's best player in a first half that saw him save twice from Messi and once even more impressively from Arthur. It's now 13 clean sheets in 26 league games for Courtois.

DF Dani Carvajal, 8 --Carvajal has had an up-and-down season by his standards, especially in attack, but this was much, much better. Dealt well with being yellow carded early for a spat with Jordi Alba. Blocked one Arturo Vidal shot, picked out Karim Benzema for a really good opportunity he missed, and got an assist for Mariano's goal.

DF Sergio Ramos, 7 -- Barca's lack of a proper centre-forward meant Ramos was denied the physical battle he relishes. No red card here as in midweek, and an otherwise tidy performance.

DF Raphael Varane, 7 -- Varane's pace is his biggest asset but here he had the intelligent movement of Antoine Griezmann to contend with. Lost his fellow France international in the first half as Griezmann put a very presentable chance over the bar.

DF Marcelo, 8 -- His place in the starting XI raised eyebrows in the press box before kickoff -- Ferland Mendy has been preferred in big games this year and offers greater defensive solidity -- but the Brazilian exceeded expectations. Enjoys partnering Vinicius on the left, contributed going forward, and dealt well with Nelson Semedo at the other end.

MF Casemiro, 7 -- Casemiro grew into the game as the entire Real Madrid team did in the second half. A far better night for him than against Manchester City earlier this week.

MF Federico Valverde, 7 -- Valverde's performance level has dropped off slightly since he impressed so much early in the season. Still brings energy, physicality and dynamism to the midfield though, showcased by one run in the first half that ended with him flashing a cross across the six-yard box.

Vinicius Junior was Real Madrid's hero in a 2-0 Clasico win over Barcelona on Sunday.

MF Toni Kroos, 7 -- Back in the side, as he really always should be against the top teams, and involved in the game's defining moment. You could see him pointing exactly where he wanted Vinicius to run -- and when the youngster did just that, Kroos picked him out to score the opener.

MF Isco, 8 -- Often looked the Real Madrid player most likely to break the deadlock, especially in a second half that saw him have one glorious curling shot tipped over by Ter Stegen and then minutes later have a header cleared off the line by Pique. Isco's recovery from being completely out of the first-team picture earlier in the season to starting games like this -- and scoring against City this week -- has been remarkable.

FW Vinicius Junior, 8 -- The hero here, scoring the all-important goal, even if he had a somewhat fortunate deflection off Pique to thank. Continues to frustrate as often as he excites. The teenager promises so much until the moment comes to play the final ball, when he so often gets things wrong, but those moments will be forgotten after the goal.

FW Karim Benzema, 6 -- Subdued. Benzema has scored two goals in two and a half months, and it showed when he blasted over one of the game's best chances in the second half. Zidane has no choice but to persist with the Frenchman -- even if Mariano scored in added time -- but his goal-scoring drought needs to end fast if Madrid are to push on from this.

MF Luka Modric, N/R -- On for Isco with little more than 10 minutes left.

FW Mariano Diaz, N/R -- Came on for Benzema in added time and scored his first goal of the season with what felt like his first touch.