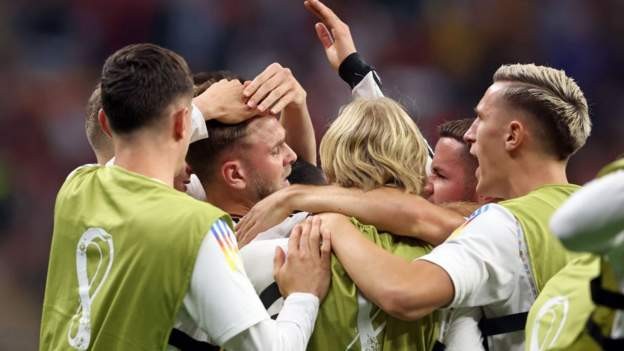 The unthinkable could happen again.

Germany remain in real danger of being dumped out of successive World Cups at the group stage, after failing to win either of their first two games for the first time since 1938.

Germany are bottom of Group E, with Spain top on four points and Costa Rica and Japan sandwiched between them on three points.

A potential exit has been branded "a disaster times 10", and would leave the future of boss Flick, and the direction of the nation's game, shrouded in uncertainty.

'Two times in a row would be really, really bad'

Germany fans were probably thinking they had already hit rock bottom when they were knocked out of Russia 2018 at the first hurdle, finishing bottom of their group behind South Korea, Mexico and Sweden.

They reached the last 16 at Euro 2020 but were beaten 2-0 by England, ending the 15-year reign of Joachim Low as manager.

A shock defeat by Japan in their opening game of this tournament, followed by a battling draw with Spain, have left Flick's rebuild on shaky ground.

Former Germany striker and manager Jurgen Klinsmann told the World Football in Qatar podcast: "We made a huge, huge mistake in the first game. No-one expected us to lose to a very strong Japan team.

"We allowed ourselves to come home from Russia with a catastrophic performance, so the expectations were clear for the German fans, they would at least go through.

"We always would say we want to win the World Cup, but this time semi-finals would be a tremendous achievement.

"We are talking about maybe exiting after the group stage, so you can call it a disaster times 10 instead of a simple disaster."

Before Russia 2018, the last time Germany failed to qualify for the second round was the 1938 World Cup in France, when there were only 16 teams in the tournament.

They have been finalists eight times, but have won just one World Cup match since they lifted the trophy in 2014.

"Part of our culture was always to be able to focus when it really matters," Klinsmann added.

"Qualifying was never an issue for us, and at the tournament we always found a way to go through and at least shoot for the semi-finals.

"People forgive you for a bad result - but two times in a row, that would be really, really bad."

What now for Flick's rebuild?

When former Bayern Munich boss Flick was appointed national team coach in August 2021, Germany had just been knocked out of the Euros by England.

Predecessor Low stepped down as planned after 15 years and Flick was given the task of rebuilding the national game, declaring at the time "our aim is to return to the pinnacle of the game".

It all started pretty well, with seven wins from seven bringing simple qualification and, despite mixed Nations League results, the mood of the nation was fairly optimistic heading into the tournament.

But that mood has quickly soured, with a slow start to this tournament meaning they have just two wins from their past 10 matches.

BBC Sport spoke to Germany and Wolfsburg fan Walter, who was at the Al Bayt Stadium on Sunday to see his country's 1-1 draw with Spain.

"If we get knocked out again in the group stage, I don't think Flick can continue as manager," he said. "It would be a disaster.

"It feels we are nowhere near teams like Brazil and France and that is very sad for us as Germany fans.

"The noise if we are knocked out will be huge, it will be very uncomfortable for a lot of our players.

"A defeat to Costa Rica would be a new low. It would be too much."

Can Germany be spared another humiliation?

It was looking a whole lot worse for Germany when Alvaro Morata fired Spain ahead in their group match on Sunday, but salvation - and real hope - came in the shape of substitute striker Niclas Fullkrug.

The journeyman fired in the equaliser to leave Germany knowing victory against Costa Rica will pile huge pressure on Japan, who face Spain, but any of the four teams in Group E can still progress to the knockout stage.

Klinsmann told BBC Sport: "The goal is huge for Germany. I am very confident that Spain will get the job done against Japan and that Germany will get through to the next round.

Former Manchester United and Denmark goalkeeper Peter Schmeichel added on BBC Sport: "I expect Spain and Germany to go through now and once they get past the group stage we all know that it becomes a different tournament for the teams and they approach it in a different way.

"There's every opportunity to improve."