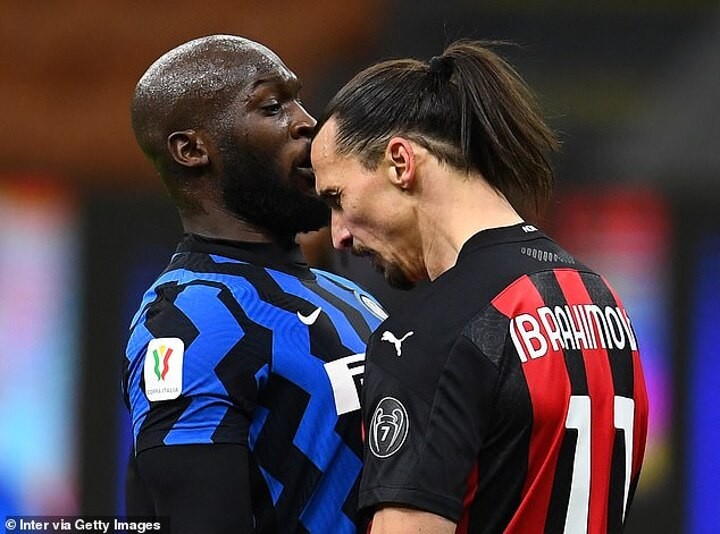 Zlatan Ibrahimovic's bitter feud with Romelu Lukaku was about more than a stray elbow on the Inter striker on Tuesday night. This all goes back to one thing: who wears the crown in Milan?

Back in February 2020, Inter fought back from 2-0 down to claim bragging rights in the derby with a 4-2 win. It was a statement victory for Inter but Lukaku had more to say.

Lukaku sealed the win in the 93rd minute and later declared: 'There's a new king in town'.

It was, without question, a dig at his former Manchester United team-mate. Tongue in cheek in one sense but a warning shot also; Lukaku believes he's a better player and that was never going to sit well with an alpha-male personality like Ibrahimovic.

Returning to AC Milan after a spell in the United States, Ibrahimovic likened it to the 'return of the king'. In his mind the best No 9 in the world was back in Italy. Lukaku's post-February derby jibe only poured fuel onto their rivalry. It was very much on.

Ibrahimovic waited patiently to exact his revenge, waited until the next Derby della Madonnina, in October 2020. It was calculated. When they went head-to-head again it would be different - and so it proved.

Lukaku scored, again, but so did Ibrahimovic, twice, in a 2-1 win for AC Milan. While they did not clash on the pitch that night, the 39-year-old was to offer up a not-so-subtle slapdown on social media.

'Milan never had a king, they have a God,' he wrote on Instagram. This fight for No 1 status in the Italian city was simmering close to boiling point.

Every corner and set-piece, Ibrahimovic was seen talking in the ear of Lukaku to the point where the Belgian eventually lost his cool. Once he did so, Ibrahimovic could barely contain his joy that a rivalry years in the making was about to be on full public display.

Lukaku and Ibrahimovic were involved in a verbal joust before they bumped heads having not seen eye-to-eye, which resulted in both being booked by referee Paolo Valeri.

As both were booked and pulled apart, Ibrahimovic can be heard yelling at Lukaku 'Go do your voodoo s***, you little donkey.'

It is believed that Ibrahimovic's 'voodoo' remark was in relation to Farhad Moshiri's extraordinary claim in January 2018 that Lukaku decided to leave Everton after a witch doctor advised him to join Chelsea.

Lukaku has since denied those accusations and threatened to sue Moshiri for it.

A jealousy exists between the two as to who is the greatest No 9 in Serie A. It goes beyond goals, this is also who can carry a team on their back to the title. Raised in tough neighbourhoods, that street-fighter mentality has never ceased.

The 'voodoo' comment quite clearly hurt Lukaku as he was restrained by team-mate and Inter staff and the 27-year-old could be later heard telling Ibrahimovic 'f*** you and your wife, you little b****' and 'you want to speak about my mother!?'.

Whenever they played together at United they never managed to score, the fit was awkward and they knew it.

Even then Lukaku was the punchline to Ibrahimovic's joke, another sign of him establishing his superiority over a player 12 years his junior.

Speaking to Gazzetta dello Sport in 2019, Ibrahimovic revealed a bet he offered Lukaku which centred around 'paying him' for every good first touch. It was insulting and Lukaku knew it.

'I will say this on Romelu: don't expect good technique from Lukaku. His best strength is sheer power. If only he'd listened to me,' Ibrahimovic said.

'At Manchester United, we made a bet: "I'll give you £50 for every decent first touch you make".

'He replied: "What do I win if I get them all right?" I told him nothing, he would simply become a better player.

'For the record, he never accepted the bet! Perhaps he was afraid of losing?!'

Often with Ibrahimovic it is a test of mentality. For a player who has likened himself to a lion in the past he has shown an appetite to attack team-mates to test them, see if they are battle hardened.

One example with Lukaku came in a training session at Manchester United.

Speaking to United's official website in 2019, Lukaku said: 'I remember one training session - because we were both strikers, we were never on the same team - there was a 50/50 challenge. He went full-on against me!

'It was an eye-opener. The guy had to fight to be in the position he is in.'

Things were once cordial between the two, Lukaku calling his 'bro' to ask if he could get the No 9 shirt when he got to Manchester United, something Ibrahimovic explained he was fine with as he wanted his team-mate to 'be happy'.

Speaking last year, there was nothing but respect for Ibrahimovic but there is a sense that that respect has since been thrown out for a bitterness that now sits between them.

'Ibra is a champion, I respect him,' Lukaku told Tiki Taka last year.

'In Manchester I could train every day with him, that was the most beautiful thing for me. It will be nice to play against him He is a great champion and professional.

'For me it's normal that he can do those things at the age of 38. He works a lot; he always gave me advice when we played together in Manchester.'

Tuesday night was a long time in the making for two players fighting for supremacy.

The next Derby della Madonnina is February 21. Expect more fireworks.