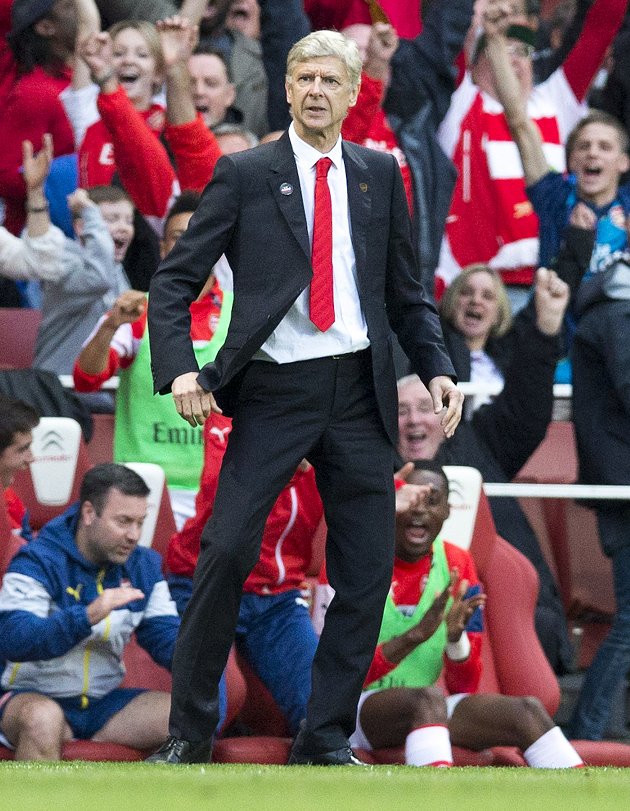 COMMENT: Rare are the occasions in which an international break is welcomed with such grace, but I for one am looking forward to the small interlude from all things Arsenal.

The team's performances this season have been nothing short of frustrating, the results are disappointing in equal measure, and after exits in all three cup competitions coexisting with the tall order of finally winning the Barclays Premier League for the first time in 12 years, yes, the anti-Wenger banners are back in circulation.

The heat amongst our divisive fan base is one that threatens to hit boiling point, increasing in ferocity year upon year, so it's good to get away from it all momentarily before the final chapter of the 2015/2016 season. Irrespective of my long-standing support for Arsène Wenger, I share the sentiment felt by others towards a team that so often flatters to deceive.

Off the back of two FA Cup trophies and a strong finish to the 2014/2015 season, the following season was bookmarked as the year we rubbed shoulders with the prime contenders for the league title - at the very least. The two most likely to pip us to the crown were expected to be Manchester City and Chelsea, currently some way behind us in the league table, which makes it all the more exasperating to know that it still isn't us who are in clear sight of domestic success. Instead, after a string of poor results, we're left with eight games to chase down the oddity that is Leicester City and our rivals Tottenham Hotspur.

Finding the right players to sign is easier said than done, but you can't help but wonder what might have happened if the club had addressed dated deficiencies in our first team during the summer, even if it meant taking a gamble on one or two names. Meanwhile some come to terms with the club's choices; others won't forgive those responsible for spurning the opportunity to finally be in possession of the Premier League trophy.

It's plausible to believe that the failure to add the right personnel has been central to Arsenal having won just 24 out of 45 games this season in all competitions, five less than we had at this stage last season. In comparison to the 2014/2015 season, we're 18 goals short and have conceded an additional five, whereas we're now also five points worse off.

A great deal of what was achieved last year was initiated by big results; platforms that provided us with the momentum required to finish the season strongly. From the 2-0 away win at the Etihad right through to the retaliation of losing the North London Derby, all played a key part in Arsenal totalling up 27 points from a possible 33 from January 2015 to the 21st March 2015, just six points less than the club had mustered in the previous five months of the season. Our 2015/2016 version, however, has picked up just 18 points in as many games, blemished further by a goal difference of five in all competitions and failing to relaunch our campaign following results against Leicester and Spurs.

Every basic statistic seems to imply that Arsenal has regressed, a bitter pill to swallow after yet another year of promise, and thus making it easy to see why so many have grown disillusioned with what the club tries to portray. The intrigue of an Arsenal without Wenger grows with each passing day, as the likes of Pep Guardiola and Jürgen Klopp look to initiate new eras with rival clubs. The argument for the Frenchman to go has never been so alive and he's the obvious choice for a particular sector of the crowd believing the club should be winning bigger things than the FA Cup.

Consequently, what appears to be a wave of joyousness on match-days quickly morphs into a bowl of sharp-tongued fans in the space of 90 minutes with increased regularity. Wenger takes a great deal of the flak from the stands, but the sentiment from Arsenal's faithful could well be the same even after he's gone.

For the sake of both sides of the argument, it's important to remember that those who run the club, who will be here long before Wenger is gone, do so with little transparency and public presence. So often it feels as though they've promised the fans a greater level of competitiveness, left Wenger to fend for himself once we fail to do so before burying us with price hikes the following season and justifying their actions with the same broken promises.

It is the prerogative of every football supporter to want more from their club. There's an acceptance amongst most football fans that money coming into the club, whether it comes from your own pocket or external sponsors, facilitates the task of your club growing stronger and more competitive. The risk, however, of clubs detaching themselves from fans as football becomes heavily intertwined with business is also very apparent.

At a time when Premier League prize money and television deals are at a record high, Arsenal were one of eight clubs to oppose proposed plans to place a £30 cap on away tickets. With 'Gunners' fans being just one group of supporters who already pay in excess of the stated sum, the club's rejection doesn't bode well with the fact that they've often failed to appease us in the transfer market and that our progress can be interpreted as motionless.

The more football gets treated like a commodity, the greater the expectations from those who pay a premium to see their team play both home and away. Fans play the role of a customer, except for the privileges of a consumer usually fail to translate itself, such is the nature of the sport. It's logical to expect something in return, which to us means renewed success and/or progression, yet we can often walk away without the joys and an empty pocket. It's a lose/lose situation and makes any eventual outrage perfectly understandable when the recipient of your cash fails to maximise its chances of being successful via the transfer market.

When compiled in such manner, sporadic eruptions of anger directed at the team are totally understandable, but despite all this, and I can assure you that the aforementioned issues and worries aren't exclusive to the so-called 'Wenger Out Brigade', we must not lose sight of our ultimate goal – to win. To eat up the 11-point gap (eight if we win our game in hand versus West Bromwich Albion) between us and Leicester in eight games is a tough ask. Nevertheless, we must trust football's unpredictability and back the team until the end of the season. The time for scrutiny shall come in the summer.

Of the long list of concerns that we as fans have, the often toxic atmosphere at the Emirates is just about the only obstacle we can overcome between now and May. This isn't to say that the pressure mounted by the fans is the main reason for Arsenal's failures on the pitch this season, but one would imagine it takes its toll on the overall mood and confidence of our players throughout 90 minutes.

The irony of it all is that the expression of dissatisfaction, at times escalating to booing our own players in the Emirates era, does the complete opposite to help our cause. Nobody likes to play poorly and I'm sure our squad members are just as desperate to win a league title as we are. For that reason, it still baffles me that being openly critical and shooting down one's confidence can be expected to produce a different outcome on the pitch.

Our key word here is “supporter". The moment we throw our arms in the air to a chorus of sighs and expletives is the moment we stop being one. If there is to be a happy ending to the 2015/2016 season, we as supporters must ensure that we provide the ambience for the players to succeed and continue backing them every step of the way. If we don't, who will?