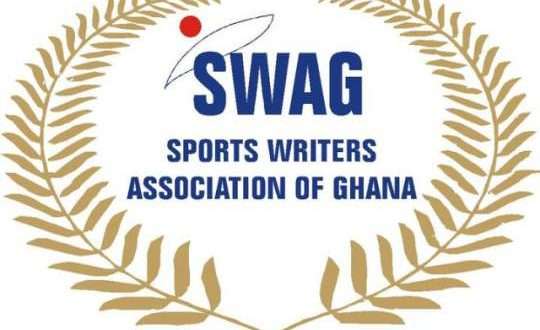 The momentous desire to form an association exclusively for sportswriters in Ghana came in the middle of June 1968. Kingsley Obeng, then a sportswriter with the Ghanaian Times mooted the idea after a short visit to Britain where such a body existed.

Following consultations with sportswriters, Broadcasters and sports commentators in the media, the vision was readily accepted at a meeting at the Accra Sports Stadium where, without delay, nominations were made to select executives to steer affairs of the association.

At the inaugural meeting, Kingsley Obeng, the originator of the idea was made Secretary, Joe Lartey became the President with Mr Ben Eghan of GBC as the Vice President. Mr.J.K. Addo Twum, Sports Editor of the Daily Graphic was made the Treasurer, with Mr William Opare of GBC serving as an executive member.

Other founding members were Messrs Ken Bediako, Yaw Boakye Ofori Atta, both of Daily Graphic, Willie Kwarteng, Joe Aggrey, Kwamina Longdon, then of the Ghanaian Times, Vincent Mensah and Eugene Thompson, of the Ghana News Agency (GNA) and Hayford Oppong Ampomah of GBC and Charles Asante of The Mirror.

The SWAG was officially inaugurated at a colourful ceremony at the Ambassador Hotel in Accra on August 3, 1968, and the guest of honour was former Deputy Commissioner of Police in the Criminals Investigations Department (CID) and also a member of the National Liberation Council Mr Anthony. K. Deku, then Commissioner for Education, Sports and Cultural Affairs.

The Association functioned enjoying the recognition of the Central Organization of Sports (COS) founded by the nations first President, which allowed at least one member of the Association to travel with a sports contingent that represented the country abroad.

The annual SWAG Awards night was instituted in 1973. A brainchild of Mr B. B. Bismark, then patron of the association, started on a humble note with the first year awarding three sportsmen – incidentally, they were all footballers.

Bismark, a keen football enthusiast and former team manager of the Black Stars mooted the idea in 1972 to then-Secretary, Eugene Thompson and former Director of Operations, Ken Bediako at the 1972 Olympic Games in Munich. He bought the first two trophies for the Best defender and Goal king.

Peter Lamptey of Accra Hearts of Oak won the Baba Yara Shield for emerging top scorer in the 1973 league; Dan Oppong of Asante Kotoko received the Robert Mensah Shield for being adjudged the Best defender, while Akwetteh Armah of Cornerstone was honoured for being the most outstanding utility player of the season. Each player got 50 Cedis cash donated by Mr B. B. Bismark in addition to the shields.

The Awards ceremony was held at the Accra Sports Stadium at the end of the first-ever well organized and second SWAG Cup match between Hearts and Cornerstone on Sunday, December 23. 1973. Hearts won the match 1-0 from a 75th-minute goal scored by Robert Hammond.

The Chairman of the Association was Oheneba Charles, then editor of the sporting news.

In 1975, Kumasi Brewery Limited (KBL) headed by the late Dennis Beesley who was later made Swag patron offered to sponsor Swag Annual Awards and they did for 17 continuous years.

The very first novelty SWAG Cup match was played between Accra Hearts of Oak and Cape Coast Mysterious Dwarfs who won the maiden edition which was a novelty.

HISTORY OF THE SWAG CUP

The annual Sports Writers Association of Ghana (SWAG) match was instituted in 1972 with a game involving Accra Hearts of Oak and Cape Coast Mysterious Ebusua Dwarfs who won the maiden edition by 3-1 on 31st December 1972.

The second edition was properly organized in 1973, when on December 23, Hearts of Oak beat Kumasi Cornerstone by a lone goal scored by expensive Robert Hammond at the Accra Sports Stadium. Col. S.H. Brew- Graves, then GFA Chairman presented the trophy to Hearts captain Kofi Bruce. The match was officiated by B. K. Frimpong Manso.

As the years flew by, the SWAG thought it wise to honour their long time Chief Patron H. P. Nyemitei former Deputy Managing Director at the then State Insurance Company (SIC) and immortalize his name for his contribution to the development and promotion of sports in Ghana.

The late Henry Plange Nyemitei was a successful sports administrator who helped most football stars, getting them employment or funds to be motivated and play their hearts out for the Black Stars. SWAG saw it as befitting to organize an annual football match between the two popular clubs in a season.

The State Insurance Company (SIC) associated themselves with the annual match as a way of supporting the association to raise funds for its activities and also playing a part in social development.

The SIC was formed in October 1955 and there was a two Americans called Mr Bob Freeman and Mr Vetenan Tandy, who came to Ghana to sponsored it on March 1st,1956.

There has been 37 editions of SWAG Cup since 1972. The last edition took place in 2015. Asante Kotoko beat Ashanti Gold by a lone goal, courtesy Eric Donkor’s late Free kick goal.

Asante Kotoko is the most successful club with 16 titles followed by Hearts Of Oak with seven.

The trophy has been won by Twelve (12) different clubs from the Thirty-Seven (37) editions.