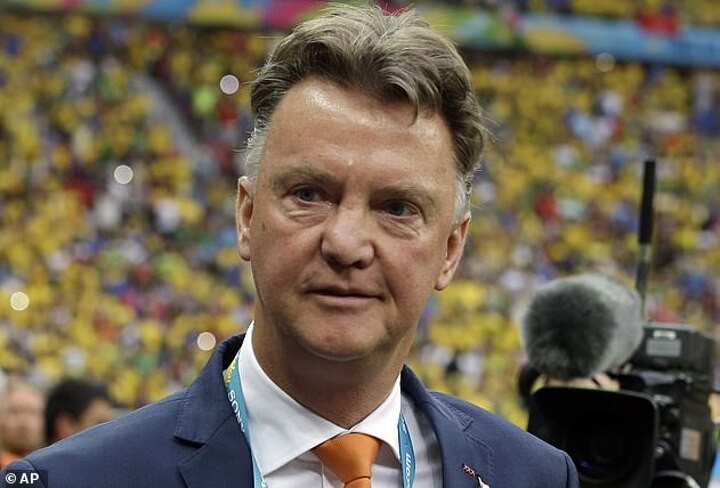 Having been out of work since he was sacked by Manchester United five years ago, Louis van Gaal looks reportedly set to return to management with a third spell as Holland manager.

The Dutch national side are looking for a new boss after Frank de Boer stepped down earlier this summer following a disappointing last-16 exit at Euro 2020.

According to De Telegraaf, the Dutch FA will once again turn to the 69-year-old Van Gaal, who first took charge of Holland in 2000 before returning for a second stint in 2012.

It would be his first job since leaving Old Trafford in 2016, when he was sacked two days after leading United to the FA Cup.

Sportsmail now takes a look at how those first two spells with the national side panned out, and what the Dutchman has been up to since leaving Old Trafford.

Van Gaal's first spell as manager of the national side began when he took over from Frank Rijkaard after Euro 2000.

Holland had reached the semi-finals of the competition, losing on penalties to Italy in Amsterdam, so hopes were high of building towards another strong showing at a major tournament.

They were placed in UEFA Group 2 of qualifying for the 2002 World Cup, though the boss was already looking far beyond securing a place in the tournament.

'I've signed a contract with the Dutch national team until 2006, so I can win the World Cup not once but twice,' Van Gaal said on the day he was appointed.

While games against Estonia, Andorra and Cyprus brought six wins and an aggregate score of 26-2, there was less success elsewhere.

A draw at home to the Republic of Ireland in the first match of qualifying was a disappointing start, before a 2-0 defeat to Portugal in Rotterdam soon after.

Holland's penultimate match of the campaign was in Dublin, knowing they needed to win, but Van Gaal's side fell to a 1-0 defeat, despite the hosts being down to ten men for over half an hour.

When Portugal beat Cyprus the following evening, Holland's qualification hopes were officially ended as they missed out on the World Cup for the first time since 1986.

Van Gaal resigned from his post shortly after, being replaced by Dick Advocaat, to end a dreadful 18 months in charge.

After a return to Barcelona and then spells in charge of AZ and Bayern Munich, Van Gaal got a second go in charge of the national side.

Holland crashed out of the Euros in 2012, finishing bottom of their group and failing to register a single point, so Van Gaal had a rebuilding job on his hands as preparations for the 2014 World Cup began.

Qualifying was certainly more successful than it had been a decade earlier. Holland won nine of their ten matches, conceding just five goals, with a 2-2 draw away to Estonia the only points dropped during the campaign.

Perhaps having learnt from the over-confidence on display during his first spell, Van Gaal sought to play down any expectations of the national side in Brazil.

'There are eight to ten teams better than we are,' he has calculated. 'The chances of reaching the quarter-finals are 20 per cent.'

Before the tournament began, it was announced Van Gaal would replace David Moyes as manager at Manchester United once the World Cup was over.

Holland got their tournament off to a sensational start, beating Spain 5-1 after conceding the opener with Robin van Persie's diving header the pick of the goals.

A 3-2 win over Australia and then a 2-0 win over Chile sent Van Gaal's side into the last 16 full of confidence as group winners.

Up against Mexico, the Dutch were still trailing in the 88th minute as they looked set for a shock exit. But a Wesley Sneijder equaliser and then a 94th-minute winner from Klaas-Jan Huntelaar turned the match on its head and sent Holland through.

In the quarter-final against Costa Rica, Van Gaal substituted goalkeeper Tim Krul, who had not played a single minute in the tournament previously, on in the last minute of extra time.

It proved to be a brilliant decision, as Krul saved two penalties in the shootout as Holland made it through to the last four.

But that is as far as they would go, with a semi-final defeat to Argentina on penalties after it had finished goalless after 120 minutes of action.

Sergio Romero made two saves in the shootout, from Ron Vlaar and Sneijder, and Van Gaal found time even in his disappointment after the defeat to take credit for the goalkeeper's heroics.

'I taught Romero how to stop penalties [at Alkmaar], so that hurts,' the Holland coach said.

'We were the club to bring him to Europe. He was a big talent, and someone who has the qualities to do that.'

Six months after leaving United, Van Gaal appeared to announce his retirement from football, though shortly after he clarified it was only a sabbatical.

He said: 'I am going to take a sabbatical year and then maybe [he will retire]. I will decide yes or no. It is not definitive.

'Maybe I retire. But in this moment, I do not know. It is not the moment to decide. For personal reasons I have taken a sabbatical year and after that I will decide.'

However, in 2019, the Dutchman announced that he would not be returning to the sport and was looking at life beyond football.

'I am a pensioner now. I have no ambition to be a technical director or a TV pundit,' Van Gaal told Dutch TV show VTBL.

'My wife Truus gave up her job for me 22 years ago, and followed me when I went abroad. I told her I would quit as a coach when I turned 55, but instead kept going until I was 65.

'She is entitled to have a life with me outside of football. I can say she is very happy.'

In June, Dutch second division side SC Telstar revealed Van Gaal would be taking charge of the side for one game next season, with fans able to enter a lottery to be his assistant as a way of raising money for charity.

Van Gaal played for Telstar in the 1977-78 season, and it remains to be seen whether taking up a potential role with Holland will impact the club's plans to welcome him back for a match.