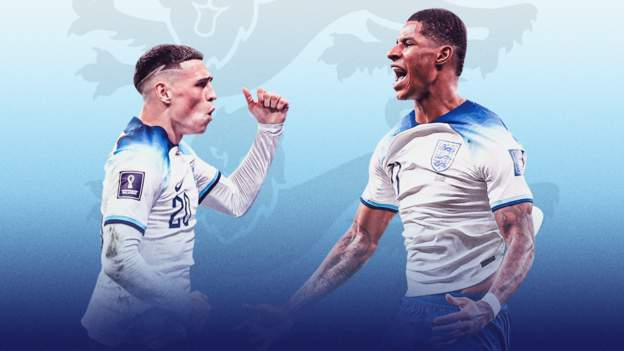 Marcus Rashford has taken a long and sometimes painful road to repair the confidence that looked shattered at points recently but he resembled someone reaching journey's end as he inspired England into the World Cup's last 16.

Rashford struggled on the margins at Manchester United last season, a shadow of his true exciting talent, but signs of recovery have been detected under new manager Erik ten Hag this season and England were the beneficiaries as they cruised to a 3-0 victory that also eliminated Wales at Ahmad bin Ali Stadium.

He has taken the form which has made him United's top scorer with eight goals this season to Qatar. The forward made an instant impact by scoring moments after coming on as substitute in the 6-2 win against Iran, and he was the star of the show with two goals here to set up a meeting with Senegal on Sunday (19:00 GMT).

It was also a poignant personal moment for Rashford as well as one of celebration for England as he said: "I lost one of my friends a couple of days ago. He had quite a long battle with cancer. I'm pleased I scored for him. He was a big supporter and a good friend of mine. He was someone who came into my life."

Rashford was given a start here as England manager Gareth Southgate shuffled his squad and performed with such distinction, as well as end product, that he has put himself in serious contention for a starting place against the dangerous African champions.

Raheem Sterling, whose form at Chelsea has been indifferent, may be under threat although Southgate is a huge admirer of what he brings to England and will not exclude him without a great deal of thought.

Irrespective of the role Southgate decides Rashford will fulfil, his steady rehabilitation is perfectly timed for England as they topped Group B with few alarms and now prepare for the tougher tests ahead.

Rashford missed a first-half chance when played in by Harry Kane, yet to score in Qatar, but was key to an increase in England's tempo at the start of the second half that overpowered Wales.

He showed the confidence to power home a free-kick for England's opener then, after Phil Foden doubled England's lead, the Manchester United striker was rewarded for another driving run at pace into the heart of the Wales defence when keeper Danny Ward let his shot through his legs.

It was an element of fortune but no more than Rashford deserved as he now boasts an England scoring record of 15 goals from 49 games, with 22 starts.

Rashford's goal was England's 100th at the World Cup and made him just the second Manchester United player to score three or more goals at a major tournament after Sir Bobby Charlton at the 1966 World Cup.

He said after England were jeered off following the 0-0 draw with USA that they did not need that adverse reaction to tell them they had not played well. Here, England's fans gave an overwhelmingly favourable verdict to the 25-year-old as he was given a prolonged standing ovation when he was substituted late on.

"Moments like this are what I play football for," said Rashford. "I'm really happy to be going into the next round of the tournament because I have massive ambition for this team. I think we can go further."

Southgate is known for his loyalty so he may yet return Sterling and Bukayo Saka to his team against Senegal but Rashford could not have done any more to state his case. He has given Southgate the sort of headache every manager revels in.

England's manager received some familiar grief about conservatism after the draw against USA but the main priority was to reach the last 16, preferably at the top of the group. This has been achieved and Southgate's selection was a winning formula on many levels.

Foden, whose non-appearance against USA raised eyebrows, got his chance here, as Southgate said he would at this World Cup. He justified his inclusion, and showed his talent, with a powerful run that drew a foul for Rashford's first goal then showed his happy knack for arriving in the right place at the right time to sweep home Kane's cross at the far post to make it 2-0.

Rashford and Foden's success came after Southgate switched their wings at the start of the second half, another sign of the versatility as well as talent in England's wide men.

And Southgate will be delighted to get almost an hour out of Kyle Walker, so vital to England's plans with his pace and flexibility, which also allows the manager to utilise him on the right side of a three-man central defensive system. He has not played since undergoing groin surgery after an injury sustained playing for Manchester City against Manchester United on 2 October.

All in all a highly-satisfactory night for Southgate and England. The post-game angst of the draw with USA was replaced with a rendition of "Southgate You're The One."

The first part of England's mission in Qatar is accomplished. Now Senegal await.