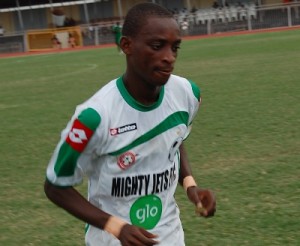 Chelsea who have emerged as the big-spenders on transfer market so far wants to add to the talented player to their list of recruits.

The Ghanaian champions are preparing for their debut appearance in the Caf Champions League next term defend the domestic league title.

Giants Kotoko and Medeama have enquired about the availability of the youth international.

Amoah has also been linked with a move to relegated French Lique 1 side RC Lens.