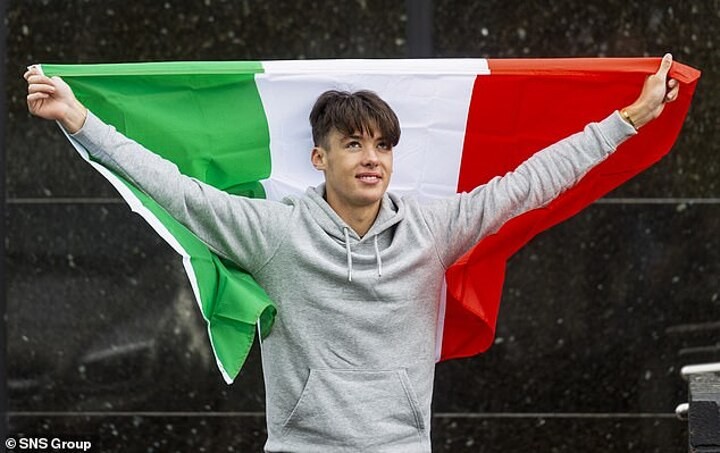 Less than six months have passed since Aaron Hickey bid farewell to Scotland. Back in September, the teen posed for pictures outside Glasgow Airport, an Italian flag flapping above his head in a stiff breeze, and set off for his new life in Bologna.

He's been busy. Since being unveiled by his new employers with a bizarre Nessie-themed video, Hickey has started 10 Serie A matches, battled Covid-19 and been named as one of the top 50 players aged under 20 by French outlet L'Equipe.

He also carved out his own bit of unwanted history in last Saturday's 1-1 draw with Sassuolo when he became the youngest player in the Italian top flight to be red-carded since 1957.

It has been a whirlwind start for only the fifth Scot in the men's game to feature in the Italian top flight after Denis Law, Joe Jordan, Graeme Souness and Liam Henderson.

But one of the first things Hickey picks out about his new life contrasts with the blustery scenes of his departure day.

'You know, there's actually no wind! It's so still,' he told Sportsmail. 'I knew it was going to be really warm, but we're in winter now and it's still really nice.'

Forget the balmy Mediterranean climate, though. There's no doubting the bravery of Hickey's move, one that took him out of his comfort zone aged 18 following reported interest from the likes of Bayern Munich, Lyon and Celtic.

'I knew that I'd have to sacrifice a lot, like not seeing my girlfriend, my pals, my mum,' he explained.

'But I had to do it for my football and I'm glad I did, because I'm really enjoying it.

'A wee bit of me was saying that I didn't want to move country. But sometimes you have to if you want to get the best out of your career.'

The maturity and pragmatism of Hickey's decision belies his youth. The left-back's determination to play as much as possible, at as high a level as possible, was foremost in his thoughts when deciding where to play his football.

'I had a few options but felt this would be the best because I thought I'd get more opportunities at Bologna,' he said. 'That was most of the reason, the football. Before I moved, I felt the training and coaches would be good in Italy and improve me every day.

'I came and visited, and I got a really nice feel from it. Everyone was really welcoming. I probably still would've chosen Bologna, but because I visited, it gave me that reassurance that I wanted to come to Italy.'

It's little wonder he felt encouraged by the coaching he would receive. His manager is none other than two-time Serie A winner Sinisa Mihajlovic, one of the greatest Serie A defenders of the 1990s and 2000s.

Mihajlovic is best remembered for his astonishing free-kick ability, but his background playing on the left and in the centre of defence means the Serb has had plenty of advice to offer Hickey.

'He gives me really good tips all the time — I mean all the time! It doesn't matter if I do something good or bad, he always comes over and then gives me wee tips,' said the Scot.

'I really like him, he's quite strict but he has to do that sometimes. He does (have a temper) sometimes.

'But I like it, because it makes you concentrate lots more and you need to know what you're doing from the set-plays. If you make a mistake, you're going to get it.'

So far, Hickey's multi-lingual team-mates have helped translate the coaching instructions he receives. But the defender is taking Italian lessons after training, along with some other foreign players, and is starting to pick up the language.

Hickey says he expected to deputise for former Ajax defender Mitchell Dijks: 'He's a really experienced player and I knew that he would probably get most of the game time.'

But the Scot didn't get much settling-in time. Dijks was sent off in the opening game of the season against AC Milan to earn a suspension, and the Dutchman then picked up an injury that ruled him out until just before Christmas.

Dijks' misfortune was Hickey's opportunity, and the youngster was immediately thrust into the limelight as he started against Parma little over two weeks after joining his new team.

'I thought I might be in with a shout of playing,' he recalled. 'Then the manager tells me: "You're going to start against Parma". That's just a wee bit of luck that I got. From there on, I started playing lots of games.'

The 18-year-old went on to start seven of the following eight games, facing the likes of Lazio and Inter, and name-checked Nerazzurri midfielder Arturo Vidal as the best player he's faced so far.

His answer to that question may have been different had he been picked in January's 2-0 defeat to Cristiano Ronaldo's Juventus, and Hickey admits it was disappointing not to face the Portuguese great.

'I was gutted,' he said. 'I was really happy just to be there, but I wanted to play against Juve.'

Hickey's run of regular game time came to a halt in December when he tested positive for coronavirus and was forced to sit out four matches, although thankfully he was asymptomatic.

'It was okay. I just had to sit in my bedroom,' he said. 'That was the worst, I was so bored. I just played my PlayStation for the 14 days.'

Moving to Serie A during a pandemic also means that Hickey is yet to experience the colour, noise and pageantry of an Italian league match with fans inside the ground — but that's not to say the supporters haven't made their presence felt.

'There have been a few times when we're training at the ground and all the Ultras have been outside,' said Hickey.

'Then sometimes when we're on the bus at the stadium, they'll be outside banging on the bus, with flares and flags and all that.

'That's just a wee taste of what they're really like, they seem really amazing. I like it a lot. It shows you what you're playing for, it gets you up for the games.'

Hickey still keeps tabs on events at home by watching Hearts and Celtic matches, and he celebrated from afar as Scotland beat Serbia on penalties to end their long wait to qualify for a major tournament.

With the Euros just around the corner and Hickey racking up good game time in a major league, he isn't shying away from his objective of a senior Scotland call-up — even if Andy Robertson and Kieran Tierney provide tough competition for the left-back spot.

'Obviously, I'd love to be in the squad,' he said.

'There are two great left-backs, but who knows what can happen. I can play right-back as well, we can see what happens. If they pick me, I'll be absolutely buzzing. If not, I'll still be supporting them.

'I'm absolutely delighted for them. Me and my dad were watching the game and it was a good night, we were so happy.'

Hickey's suggestion of being used at right-back for the national team is an intriguing one, given Steve Clarke's lack of strength in depth in that role, but there is one problem.

'I'm not sure Mihajlovic knows I can play right-back!' he said. 'I played there a few times for Hearts and I find it the same as left-back. If they pick me, I'll be absolutely delighted but we'll see what happens.'