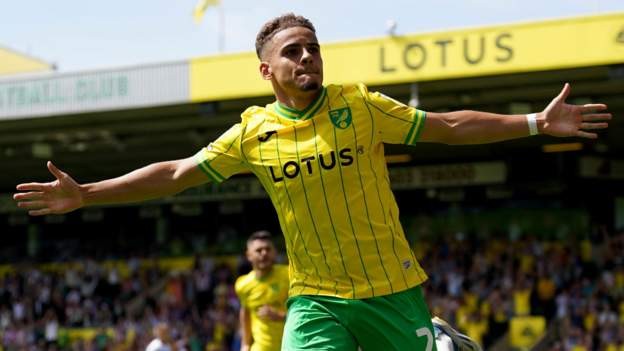 Max Aarons rescued Norwich with a second-half equaliser as they had to settle for a point against Wigan Athletic in their first home game of the new Championship season.

Dean Smith's side made a confident start but were stunned when a defensive error led to James McClean giving the visitors the lead.

Teemu Pukki and Milot Rashica combined to tee up Aarons moments after Dimitris Giannoulis was stretchered off in the second half, and he slotted home past Ben Amos.

Pukki almost won it for the Canaries with a curling strike against the crossbar, but Wigan held out for their second draw following last weekend's goalless stalemate against Preston.

The match ball was carried out by Lionesses star Lauren Hemp, born half an hour away in North Walsham

Norwich - promoted as champions in their past two second-tier campaigns - were looking to avoid a fourth successive home defeat, having lost their final three Premier League games at Carrow Road last term.

Norwich knocked the ball about confidently at the start against a side who were two divisions below them last season and Pukki, scorer of 10 goals in his previous 12 home games in the Championship, soon showed the threat he poses by outmuscling Curtis Tilt and firing just wide of the target.

The Latics were content to sit back, stay disciplined and keep their shape for the opening 20 minutes and Chile international Nunez showed what he is capable of with a deft chip over the top for Rashica, who tried to lob Amos but could not direct it on target.

Suddenly, though, Wigan won the ball in the Canaries half and Will Keane played in Callum Lang, whose shot was beaten away by the onrushing Tim Krul.

Norwich did not heed the warning and when Gibson carelessly gave the ball away to Keane following a throw-in, he found the unmarked McClean, who slipped the ball through Krul's legs for the opener.

Wigan's confidence grew as a result of the goal and although the home side produced 11 shots in the opening half, only one was on target, and there were some boos from the crowd as they walked off at the interval.

Rashica tested Amos straight from the restart, but the powerful Josh Magennis soon forced another mistake out of the Norwich defence and Krul had to kick away his powerful shot from an angle, with the excellent Keane again providing the assist.

Canaries left-back Giannoulis went off with what appeared to be an ankle injury following a touchline challenge with Lang, and the lengthy delay may have affected Wigan's concentration as Aarons levelled the score.

Pukki rattled the woodwork from Todd Cantwell's pass before 10 minutes of added time, and Smith threw on his second South American import, Brazilian Gabriel Sara, to try to force a winner.

Sara produced a brilliant drag-back but Tilt threw himself in the way of his shot and Cantwell blazed the follow-up over the bar.

Tom Naylor (Wigan Athletic) wins a free kick in the defensive half.

Todd Cantwell (Norwich City) wins a free kick in the defensive half.

Thelo Aasgaard (Wigan Athletic) is shown the yellow card for a bad foul.