New Edubiase United president Abdul Salam Yakubu has twisted the knife into the Kurt Okraku-administration after claiming call-ups to the Ghana U20 team were not on merit.

The experienced administrator is frothing at the mouth after the beige performances by the Black Satellites team at the WAFU U20 tournament in Benin.

Despite qualifying to the final of the tournament and booking a ticket for the 2021 CAF U20 Cup of Nations in Mauritania, Yakubu is unimpressed.

To some, it could be sour grapes since the candidate he campaigned for in the Ghana FA presidential election got defeated by Kurt in 2019.

Abdul Salam is seething with rage after his player Salim Adam was dropped for the tournament in Benin.

He feels the midfielder was given a raw deal and went on rampage on social media, accusing the current Ghana FA administration of selfishness.

The 27-man squad called up for the tournament in the neighboring country are dominated by players aligned to Black Satellites management committee members and associates, it has been claimed in the local media.

The move has been heavily criticized amid accusation of bias and unfair call-ups into the team - an action which appears to have divided the football front.

"You succeeded an FA that gave equal opportunities to every talent at all national team levels. If that administration was selfish as you're doing now, you probably would not have had the opportunity to market your biggest asset." he fumed on his facebook page. 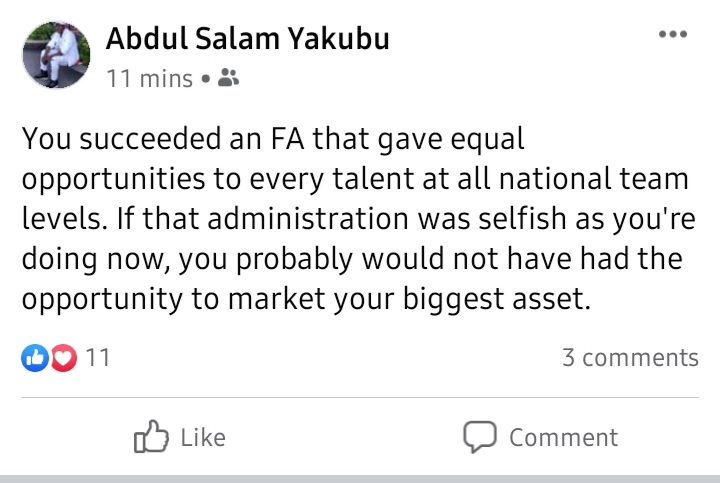 The Black Satellites secured qualification to the 2021 Africa Youth Championship in Mauritania after a 5-3 penalty win over Niger.

But the win has been overshadowed by accusation of influence peddling after several quality players were reportedly dropped to make way for "business call-ups".