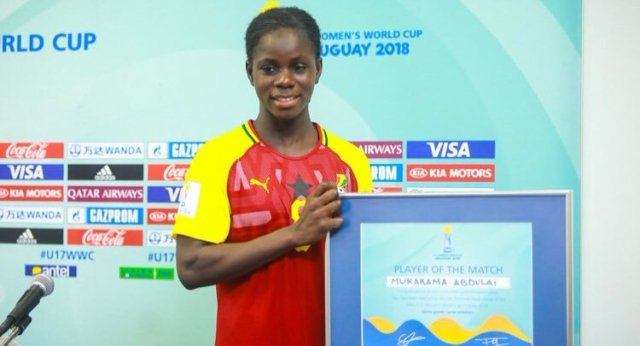 Black Maidens captain Abdulai Mukarama says she is proud of her record at the FIFA U-17 Women's World Cup.

The Northern Ladies striker scored an incredible seven goals in four games before Ghana were eliminated from the competition.

Her seven goals makes her the leading goal scorer at the FIFA U-17 Women's World Cup in Uruguay, as well as Ghana's all time top scorer at the tournament beating Jane Anyieyam's six goals tally.

"I am very happy and excited about it," she said on the team's arrival. "Scoring seven goals in four matches is a very good thing to me even though we didn't get to the finals as we wanted. But it is important to me," she added.

The 17 year old also revealed the secret behind her goal scoring prowess, saying she makes sure she position her self well to bag in the goals.

"It's normal because I always make sure I'm around the opponents box. I position myself well to get the goals. It's nothing I just make sure I train for it and get the goals," she added.

Ghana were eliminated from the FIFA U-17 World Cup after losing 4-2 on penalties to Mexico on Sunday.