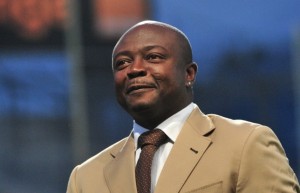 Ghana football legend Abedi Pele feels he is the luckiest father on earth as all his three sons are excelling on the big stage of world football.

Andre Ayew, the second son of the three-time African Player of the Year, enjoyed a terrific season last term with French side Marseille, where he crowned an incredible campaign by winning the clubâ€™s Player of the Season.

His youngest son, Jordan Ayew, tipped as one of the rising stars in football, inked a contract extension with Marseille that will keep him at the Velodrome until 2015.

The 23-year-old is set to play more games in Belgium this season after winning the hearts of his technical team in the latter stages of the last term.

Now with all his sons settled in the trade in which the Maestro himself excelled in, the three-time African Player of the Year thinks it is a blessing.

â€œIâ€™m so happy to have three kids, who are playing the game and playing at the highest level,â€ he toldÂ Citi FM.

â€œI donâ€™t like talking much about my kids, but I just want to express my feelings once in a while and I thank God he has giving them this brilliant talent and that they are making fans happy all over the world.â€

An excited Abedi was full of praise for his sons, but believes there is a great deal more to come from them.

â€œFor now they are young boys, we donâ€™t need to sing their praises all along. They have a young career which is another 10 to 15 years to go, letâ€™s just pray they are well and they continue to play great football," Pele said.

He added, â€œIâ€™m grateful to God they are making millions and millions of fans happy, they are touching their hearts and Iâ€™m delighted they are using the talents God has given them in the right direction."

Abedi will be much happier on Sunday if his own club Nania FC beat Kotoko in the Ghana FA Cup final.