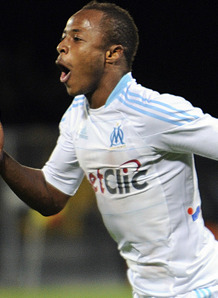 No official request has been made towards signing Andre Ayew amidst a plethora of reports linking the Ghana midfielder with a move away from Marseille.

This was confirmed by the father of the 21-year-old, Abedi Pele who was however evasive on the future possibility of his son moving elsewhere.

â€œWe as a family will advice Dede to ensure he makes the right decision but that obviously will not be for public consumption,â€ he said.

â€œBut for now there has not been any significant contact so we donâ€™t consider any such advice.

â€œWhat we want him to do is to concentrate on his career at Marseille who have the Champions League and the Championship to fight for.

â€œIn football nobody can say never, he has been a good player for Marseille after rising through the ranks and the club will also need to benefit from the investments made in him.â€

Ayew has risen through the ranks to become one of the important players for both club and country.

His six goals so far in the French League has helped steer Marseille to 8th on the league log and is expected to play an integral part for Ghana at next yearâ€™s Africa Cup of Nations in Gabon and Equatorial Guinea.