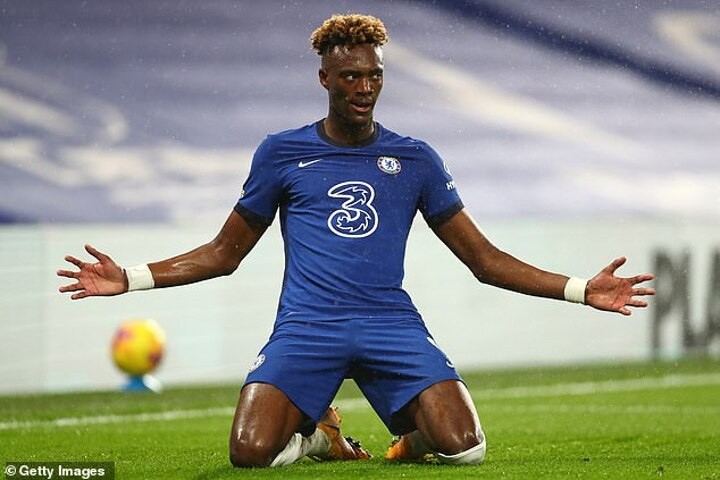 Six goals in just eight Premier League starts is a pretty prolific return for a player who hasn't been an automatic choice for Frank Lampard.

Indeed, there's almost been a misconception about the striker's season thus far.

All eyes were on Abraham at the start of the campaign following his excellent breakthrough season at Stamford Bridge last term.

The club had just signed Timo Werner, one of the most sought after attacking players in Europe, and suddenly there were questions about where Abraham would fit in.

The 23-year-old scored 18 goals for Chelsea last season - at most clubs he would have been an automatic starter this term.

But Chelsea aren't most clubs and Abraham has had to grasp every opportunity he's been afforded this season.

Second seasons can often be problematic for young footballers. Opposing players have had a season to figure you out.

But, more pertinently, you are invariably judged by what went before.

For Abraham, what went before was unforgettable: finally establishing himself at the club he joined as eight-year old, making his senior England debut and scoring his first international goal.

Seasons don't get much better than that. The very best players go again, however.

And credit to Abraham, he has found a way of enhancing his reputation during what has been a stop-start season.

His brace against West Ham on December 21 made Abraham the second youngest player to score 20 Premier League goals behind Eden Hazard.

Abraham's strike in the 3-1 loss to Arsenal on Boxing Day was his 26th in all competitions since the start of last season, seven more than any other player.

The numbers speak for themselves. His position as one of the most promising young No 9s in Europe remains intact despite not being afforded the consistency of playing he may have thought last season's performances and goals would have granted him.

Traditional centre-forwards are almost a dying breed, but in Abraham those practices continues.

Strong, mobile and intelligent, Abraham remains one of the most effective players of his kind in Europe for his age.

Indeed, his reputation will undoubtedly be attracting glances from across the continent, particularly given his current contractual situation.

Abraham has two years left to run on his existing deal at Stamford Bridge. There will be several Premier League clubs willing to take Abraham off Chelsea's hands if a new deal can't be negotiated.

Indeed, Abraham refused to entertain the possibility of leaving Chelsea last summer to fight for his place despite interest from a number of top-flight clubs.

The fact he's been in and out of the Chelsea starting XI this season will almost certainly alert rival teams to his potential availability.

Chelsea, of course, will do all they can to make sure Abraham's a fixture at Stamford Bridge for the long-term.

How the striker's season pans out may have a key bearing on how discussions to extend his contract develop.

So, too, will a successful European Championship campaign with England.

But what ever happens, Abraham will be a man in demand - at Chelsea or elsewhere.