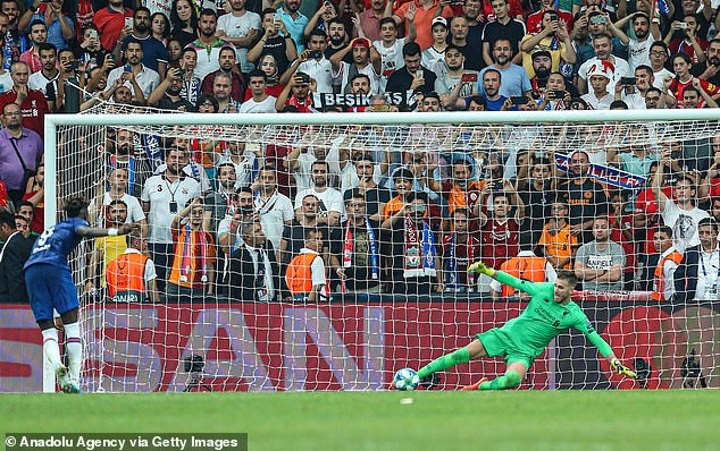 Chelsea star Tammy Abraham has described his penalty miss in last year's Super Cup and the racist abuse he received on Twitter afterwards as his lowest point in football.

The 22-year-old striker missed the decisive kick in a shoot-out with Liverpool in Istanbul back in August and was left distraught and in tears.

He was then bombarded by cruel messages on social media saying he wasn't good enough to play for Chelsea.

But Abraham has gone on to enjoy an excellent season for Frank Lampard's side, scoring 15 goals across all competitions as Chelsea chase a top four finish.

The England international told Chelsea's official website: 'The season before [on loan] at Villa, I had missed one out of eight or nine [penalties] so I had confidence.

'I remember walking up and the pressure got to me, nobody had missed up to that point so I knew I had to score.

'I had what I wanted to do in my head but I changed my mind when I was taking the run-up. Afterwards in the changing room, everyone came round me saying 'don't worry, it happens to the best players' but at the time I just didn't want to hear it.

'I wanted everyone to leave me alone, I was in tears. I lost a lot of confidence after that.

'I was doing well on my loans but when I came back to Chelsea, it just wasn't working - I couldn't get my first goal, I couldn't do anything.

'In my head I was wondering if it was worth all the stress because I was getting abused on Twitter, a lot of racist comments, people saying I wasn't good enough to be playing for Chelsea.

'It was the biggest down in anything I've done in football.'

The early season meeting between Champions League winners Liverpool and Europa League holders Chelsea at the Vodafone Park in Istanbul proved to be an entertaining contest.

The game finished 2-2 after extra time and nine consecutive penalties were converted before Liverpool keeper Adrian blocked Abraham's penalty with his right leg to win the trophy for his side.

Though Abraham had gone four matches at that point without finding the net for Chelsea, leading to his doubts, the goals would soon flow.

In late August, he scored twice in a 3-2 win at Norwich and followed that up with two against Sheffield United and a hat-trick against Wolves to get the ball rolling.

'As a striker, you need to believe in yourself and have that confidence,' Abraham added. 'Being Chelsea's No 9, you've got big boots to fill so I need to believe that I'm the man, that I can score and do well for the team.'

Thanks to Abraham's goals this season - he is the club's leading scorer by some distance - they have a great chance of qualifying for next season's Champions League when the season resumes next month.

Currently sitting fourth, they have a three-point lead over Manchester United.