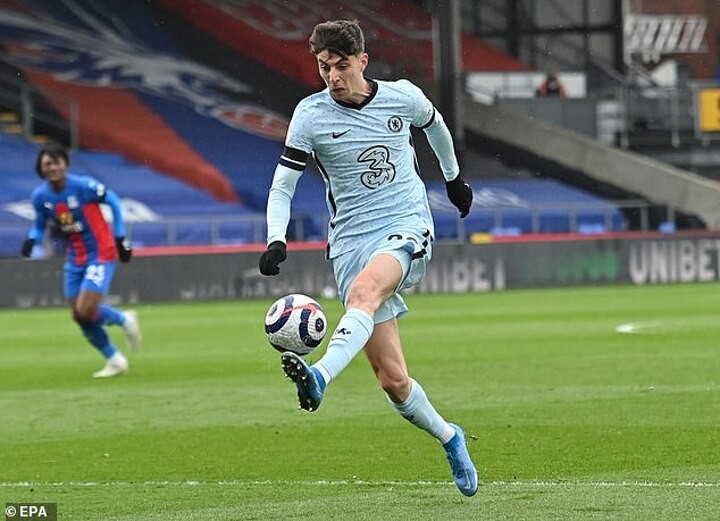 There is a view held by some in his native Germany who have followed his career closely that Kai Havertz has all the potential to eventually become one of the best players in the world.

There have also been suggestions that he was effectively bought for Chelsea as a gift from Roman Abramovich.

That, beyond sanctioning the deal that could reach a club record £85m, this was one of those Chelsea transfers the owner had extra involvement in, Abramovich wanting him in Blue as much as anyone else involved in the signing process. In some cases maybe more.

Of course, few managers would not want to work with a player with Havertz’s reputation given the opportunity.

Though how much of his debut season has unfolded has only added credence to the theory that getting Havertz through the door was the priority. Working out where he fitted in could come later.

Frank Lampard was unable to find the solution, deploying Havertz in numerous positions – right wing, as a slightly deeper right-sided midfielder, attacking midfielder, in central midfield and also through the middle.

And Havertz hardly lived up to his billing or looked like much of a present to his manager then.

In mitigation, he has been having to adapt to a new league, country and the higher demands at Chelsea this season.

‘He stepped clearly out of his comfort zone,’ head coach Thomas Tuchel said.

‘When you change the club from Bayer Leverkusen to Chelsea and the Premier League you absolutely want to challenge yourself.’

There is also a feeling among some at Chelsea that the bout of coronavirus Havertz suffered in November affected him even more than was expected while other fitness issues this season have also hampered his attempts to get in the best condition.

Lampard’s successor Tuchel though, now appears to have found an on-field role and way to start maximising Havertz’s talents which looks worth persisting with.

In fairness, Lampard did try Havertz as a false nine against Liverpool in September but had to abandon the experiment and sacrifice the German at half-time after Chelsea went down to ten men.

It was not a plan he revisited.

But Tuchel, who has also used Havertz as an attacking midfielder, is beginning to get the sort of joy out of the 21 year-old as the roaming figure starting in the middle of his front three to suggest it could be sustainable.

Hugely influential in the position against Everton last month, Havertz was even better in this emphatic Chelsea win at Crystal Palace, scoring one and setting up another.

Havertz’s contribution might have also have helped give Tuchel some food for thought when it comes to how best to structure his attack as a whole.

With his three recognised striker options left on the bench, Chelsea instead produced their best attacking display under Tuchel with the versatile Havertz, attacking midfielder Mason Mount and two-goal winger Christian Pulisic in a fluid front three.

Discussing Havertz as a player, person and why he does not need to be an ‘emotional leader’ for Chelsea, Tuchel said: ‘He’s simply not that guy that you will fully feel or see in rage.

‘Some guys you feel them they have to fight with the others to get a certain momentum. He is not the Diego Costa kind of guy.

‘I will never demand that he becomes this. Sometimes you cannot confuse his body language that he does not give everything. He is a very quiet character but he is very well aware of his quality.’

His attributes will see him perform the striker’s role very differently to traditional front man Costa too.

Rightly there was also some caution from Tuchel. Havertz could have scored four or five rather than just one against Palace and Tuchel admitted he needed to be more ruthless.

He has had far less effective games as false nine too, like in Chelsea’s Champions League win against Porto last week.

With no disrespect meant, Tuchel also pointed out there are bigger tests for Havertz and his team, starting with Tuesday's second leg against Porto.

Tuchel added: ‘This is the way, how he can help the team and become an important player. If he can show this regularly and that he is involved in the games, he can show his quality on the pitch.’

Palace did not offer much resistance until the game was already beyond them but Roy Hodgson hit back at criticism of his 13th-placed team.

‘They’re the facile comments that are always made. Complacency, players already happy to have done that, in their armchairs, already thinking about the beach,’ the Crystal Palace manager said.

‘There was no question, if you like, of armchairs or complacency in the second half.

‘Any worries about the final seven games? Of course. Now we’ve got the last seven games at least five teams who are in a similar category [to Chelsea], in the top five or six teams in the country.