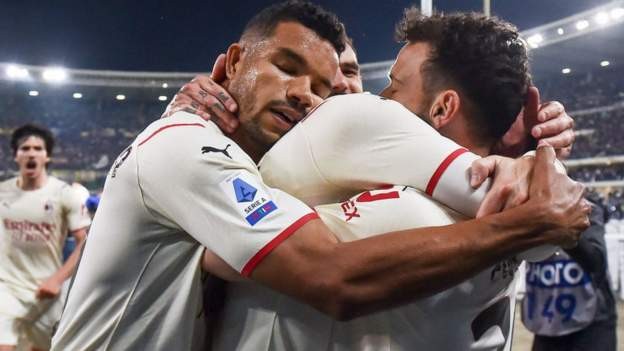 AC Milan have not lost in the league since January

AC Milan legend Franco Baresi is confident the current group of players will hold their nerve to win the Serie A title for the first time in 11 years.

With two games to go Milan are two points clear of their city rivals Inter, who won the Coppa Italia on Wednesday, to add to the Super Cup trophy they lifted in January.

Milan could win the title on Sunday if they beat Atalanta and Inter drop points against Cagliari.

"I think the team has shown that they know how to manage the situation, the tension and the responsibility," Baresi told BBC Sport.

"There is conviction, there is trust, there is awareness that we can really reach what was until a few months ago an unexpected objective. It would be a joy for everyone. "

Stefano Piloi's Milan side have not lost in the league since 17 January, a run of 14 matches.

Baresi won six Serie A titles during his 20-year spell at the club, retiring his number six shirt when he played his final game in 1997.

The success of previous generations has weighed heavily on recent AC Milan teams but he believes they are now entering a new era of success.

Baresi, 62, added: "Milan have worked very well in the last two years. Last year they returned to the Champions League and this year I think we are reaping the benefits of the work of the technical team behind the scenes.

"The club and the players have tested themselves and have shown that they want to win again and this year it can be an important year, it's good to go back to winning and it's what we all want.

"These current players know the responsibility of wearing this shirt and I believe they have everything to be able to amaze and give us this joy that we are all waiting for."