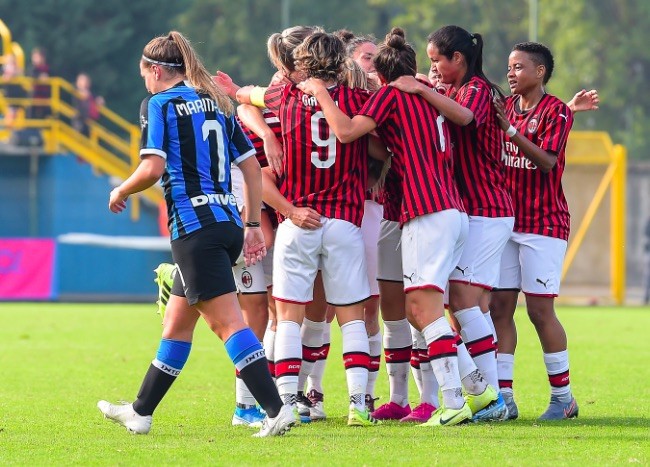 AC Milan emerged victorious in Serie A Femminile’s first ever Derby della Madonnina as they overcame Inter 3-1 on Sunday afternoon to maintain their perfect start to the 2019/20 season.

Inter spent last season in Serie B and the pair met in the Coppa Italia in December 2018, with the Rossonere coming out on top with a 5-3 win on that occasion.

The game was played at the Stadio Breda in front of a sellout crowd.

Dominika Conc put the visitors ahead with 35 minutes played to send Milan in ahead at half time.

Ten minutes after the restart Inter levelled through Gloria Marinelli, but parity didn’t last as Conc restored the leaders’ lead within three minutes with a powerful strike from range.

Deborah Salvatori Rinaldi afforded Milan the comfort of a two-goal lead with just three minutes of the 90 remaining and ensured that the Rossonere maintained a 100 percent record both in this Serie A Femminile season and also in games against their Milanese cousins.

Milan are level with Juventus on nine points at the table’s peak, while Inter have four from their first three top-flight games.