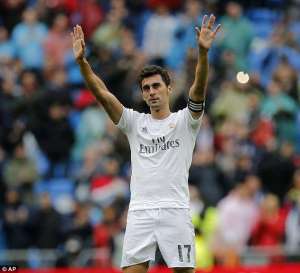 AC Milan have identified Alvaro Arbeloa as a solution to their defensive woes, with a deal for the former Real Madrid man believed to be close.

The Spaniard has already agreed a one-year deal with the club with an option for a second year and Milan vice-president, Adriano Galliani, has already spoken on the phone with the player’s agent, Oscar Ribot, who has been convinced to bring his client to Italy, and the club’s Chinese investors have also reportedly given their approval of the transfer.

According to La Gazzetta dello Sport, the 33-year-old’s contract has already been agreed on and it’s now only a matter of time before the free agent signs for the Italian club.

Milan coach Vincenzo Montella insisted that the main priority was a central defender, and with the recent injury to Cristian Zapata, the Rossoneri are short of defensive options.

Arbeloa is also very experienced and could help the growth of young defender Alessio Romagnoli, with the former Liverpool defender being fairly versatile as he can also play on the right hand side of defence.

With very little funds for the market, the club have been forced to look for cheaper options on the market in contrast to main target Mateo Musacchio, and the free addition of Arbeloa means that Milan can still bolster their defence with another defensive signing later on in the transfer market.