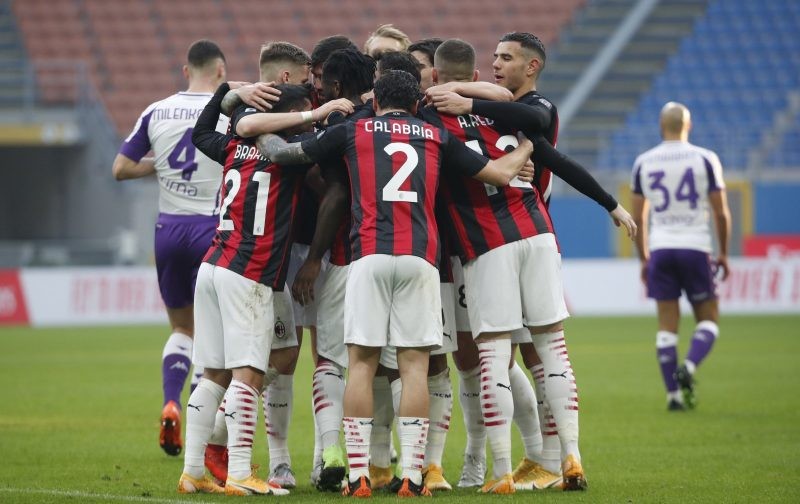 AC Milan continued their unbeaten start to the Serie A season as they sealed a 2-0 victory over Fiorentina on Sunday, despite missing top scorer Zlatan Ibrahimovic.

An early Alessio Romagnoli header was followed up by Franck Kessie’s penalty as Milan moved five points clear at the top of the table, even with the latter missing a second spot kick.

With nine matches gone, Milan are looking like genuine title contenders for the first time in almost a decade and the victory at the San Siro created daylight between them and Inter at the top of Serie A. As Italian football hit the pause button in March at the height of the coronavirus pandemic, few could envisage that seventh-placed Milan, struggling for goals, would head into December unbeaten and clear at the top of Serie A.

Yet, Stefano Pioli has got his Rossoneri side firing on all cylinders and despite some early nervous moments, they were in complete control against Fiorentina. Milan are unbeaten in Serie A in 22 matches and have equalled their 1973 record of scoring in 29 consecutive matches, as they brush aside all before them.

There is still a long way to go in the season and a deep run in the Europa League may affect form domestically after Christmas, but there can be no denying that Milan have shown their title-chasing credentials. Dismissed as a fluke as they went unbeaten over summer, the Rossoneri are anything but. How do you solve a problem like the evergreen Ibrahimovic? The talismanic Swede leads the scoring charts but was ruled out with an injury picked up against Napoli last week, yet Milan showed they had the answers in his absence.

Whilst Ibrahimovic has been a dominant figure up front, the Diavolo were far from toothless in his absence and showed good attacking intent, particularly from Hakan Calhanoglu. With Ante Rebic still feeling his way back from injury and Rafael Leao to return, Milan will take confidence in being able to secure a good win without Ibrahimovic.

Indeed, of the six matches the former Inter striker has missed this calendar year, Milan have won five and drawn one, whilst their win percentage shoots up 83% in his absence, compared to 63% with him.

A fear that they are overly reliant on the 39-year-old has been put to bed for the time being, but Milan will face tougher tasks than an out-of-form Fiorentina. How they cope without Ibrahimovic in the challenging assignments may come to define their season.