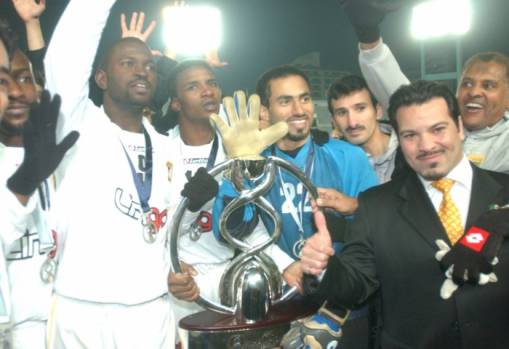 Al Ain: Inaugural AFC Champions League winners Al Ain may be hosting the 2016 edition’s final a goal down ahead of Saturday’s kick-off following their 2-1 loss in Korea to Jeonbuk Hyundai Motors in the first leg, but they need not look far for inspiration to one of the most remarkable comebacks in the history of Asian football and the story of the 2004 final, told by the man who masterminded the turnaround, coach Dragan Talajic.

Not many coaches or players in the world game can boast a 100% winning record. And when you consider that that exact record helped Saudi Arabia’s Al Ittihad win the 2004 AFC Champions League, Dragan Talajic’s achievement is even more remarkable, with the match in question one of the most astonishing in Asia’s rich footballing history.

Standing at the side of compatriot Tomislav Ivic, who Talajic had not hesitated in leaving a head coach's job he had held for three years to join at Al Ittihad, the Saudi Arabian side had won their group ahead of Islamic Republic of Iran’s Sepahan, Kuwait’s Al Arabi and Uzbekistan’s Neftchi before edging out China’s Dalian Shide in the quarter-finals.

And after Osama Al Harbi’s 88th minute goal in the second leg of their semi-final against Jeonbuk Hyundai Motors secured a 4-3 aggregate victory, Al Ittihad set up their final meeting with another side from Korea Republic, Seongnam Ilhwa Chunma, who had edged out Uzbekistan’s Pakhtakor in the semi-finals.

“I was a head coach, but with Mr. Ivic it was unbelievable to work with him as an assistant as I could learn from him. I saw the opportunity to work with this coach at a big club, so I stepped down to work with him,” says former goalkeeper Talajic, who retired as a player in 2001.

“I had been with the team for eight months as we arrived at the start of the season and I knew everything about the players.”

And Talajic’s experience led Ivic to consult his young prodigy on the eve of the first leg of the final over the team selection for the game which would be played in a pleasant 18 degrees in front of a crowd of 21,000 at Prince Abdullah Al Faisal Stadium in Jeddah.

“With all respect to my head coach as he brought me to Saudi Arabia and I was given a chance as a boy to learn from Mr. Ivic who has now sadly passed away having been an excellent coach who helped me start my career, I cannot forget one night before the game, he asked me which first 11 players should play the game,” says Talajic.

“But he did not trust me. From the 11 players I picked, eight of them were not on the list. I respected his decision as he was the head coach, but until now I don’t know why he didn’t trust me as he asked me for my opinion. I was surprised by the team selection, and the end result was bad.

“But in the second game I changed eight players. I still don’t know why he didn’t take my advice, but sometimes coaches can be crazy and we have an idea and we follow it.”

One of those decisions was particularly surprising with Saudi Arabia striker Marzouk Al Otaibi, who was the top scorer at the 1999 FIFA Confederations Cup, left out despite having scored five times en route to the final.

And Seongnam, who had won the Korean title three years in a row, returned home having won the first leg 3-1 thanks to goals from Denis Laktionov, Kim Do-hoon and Jang Hak-young, with a Redha Takar header the only response for the home side in the first half.

The result saw Ivic relieved of his duties, and 39-year-old Talajic promoted to his first head coach role.

“This is a really nice memory for me, but at the time it was a terrible time as we had a lot of problems at our club with a lot of key players injured,” says Talajic.

“We then lost the first game 3-1 when I was assistant coach. After that game the board and the president of Al Ittihad made a decision to change the head coach and give me a chance.”

Talajic’s first major decision was to take the team straight from the heat of Jeddah straight to the cold of Korea ahead of their second leg in Seongnam, a satellite city of Seoul.

“My first job was to wake up the players physiologically, and luckily they trusted me and we were able to create something and I told them what we needed to do during the game. And they listened to me. I knew that a lot of people didn’t trust me as I was too young at 39 and everyone thought I couldn’t do anything as we would lose again,” says Talajic.

“We were coming from 30-34 degrees in Jeddah and when we arrived in Seoul it was -2. It was also Ramadan at the time and my players didn’t not eat or drink anything. It was also hard training, but at that time, Al Ittihad had some great players and most of them were part of the Saudi Arabia national team and one Brazilian genius Tcheco. You show them something once, and if they want to they can do it, and thankfully they wanted to do it and listened to me. We worked on five actions in training. We also played 4-1-4-1 and the players were surprised, but over this time we repeated these five actions.”

But despite all of Talajic’s hard work, a full crowd of expectant Seongnam fans filled the stands at Tancheon Sports Complex ready to crown their team as the new champions of Asia.

“We had to build the players up to make them believe we can win. We prepared the team to be a good opponent, but the most important thing was how we would play with the four midfielders who were all strikers. We played a split team of five attackers and five defenders; although when we defend, everyone had to help. You don’t see this even now. Before we played classic 4-4-2, although one striker was playing in midfield,” says Talajic.

“I was young at the time and maybe I was a bit crazy playing with five strikers. “I told everyone before the game that we would win. I always knew we would win, but I didn’t know if it would be enough.”

Talajic, though, had nothing to worry about as first-leg goalscorer Takar netted with another thumping header from an Al Ittihad set-piece midway through the first half that gave the visitors the all important opening goal before Hamzah Idris netted in injury time from close range to level the scores on aggregate at the break.

“After the first goal people on the bench started to smile and other players started to trust. The second goal was then most important as we scored at the end of the first half,” says Talajic.

“Half-time was very difficult as my players didn’t want to sit, they just wanted to go out and continue. I reminded them to listen to me and concentrate. I had to shout at them to calm down and think with their brain and not their heart, but thankfully they listened to me.”

In the second half, Seongnam were forced to attack and played into the hands of a counter-attacking Al Ittihad and Mohammed Noor tucked the ball past Seongnam goalkeeper Yang Young-min 10 minutes after the re-start to hand his side the lead on aggregate.

“After the third goal everyone started to celebrate. The brother of the President who was there, and who now is the President, then asked me to put on defenders. I said OK. I chose another striker to warm up, he asked me if I was crazy,” says Talajic.

“I told him now we need to play more with our brain as there is too much time left and if they score one goal we will lose. I need to score one more. He was shocked.”

Al Ittihad captain Noor, with the Seongnam defence in disarray, then added a fourth with 12 minutes remaining before Manaf Aboshgair completed the rout deep into stoppage time with a curling effort.

“We were playing well and we scored a fourth and the President’s brother then told me now I can do what I want. This is how I know I was crazy, but I have kept this philosophy for the rest of my career that you need to take risks, but you need the quality,” says Talajic.

“Although now, after 10 years, I might not be that crazy. I enjoyed watching the last 15 minutes and the fifth goal was for the history books. I was told in the press conference after the match that this was lucky, but lucky is 1-0 or 2-0, but not 5-0. This made me a little upset as people said it was lucky.”

Al Ittihad players retuned to Jeddah as heroes having completed a 6-3 aggregate victory to keep the trophy in the West after Al Ain from the United Arab Emirates had won the inaugural AFC Champions League the previous year after beating Thailand’s BEC Tero Sasana by a far more modest scoreline of 2-1 over two legs.

“We came back as the champions having won 5-0 and people were saying how unbelievable it was, but that is football. Usually players don’t like it when an assistant coach takes over, but they listened to me,” says Talajic.

“I am sad that this would have been an amazing trophy for Mr. Ivic at the end of his career. It is my trophy, but some part of it goes to Mr. Ivic.

“I spoke to Mr. Ivic after the game. He waited for me in Jeddah and he was happy for me like a father. He was very happy for me, although he was still a little upset about what happened to him.”

And based on these foundations, Al Ittihad retained the title a year later under Romanian coach Anghel Iordanescu following a 5-3 victory on aggregate over Al Ain after Talajic’s time with Al Ittihad ended soon after the side returned to Jeddah.

“I still have a relationship with them as they can’t forget and I can’t forget. But after the game, the President came to me and told me they would bring in another big name coach. I said thank you, but this is not for me. You gave me a chance, but now you don’t trust me. If you don’t trust me, you can go your way and I will go my way,” says Talajic.

“Maybe it was a mistake as they are a big club with good money, but I don’t care about money, I only care about my career. He was very shocked.

“I have a lot of respect for them and I am still in touch with them, but I am happy with my decision.

“I only had one game with Al Ittihad. After that game he didn’t trust me.”

Following his departure, Talajic enjoyed spells with clubs in Bahrain and Jordan before guiding Kuwait Sports Club to the final of the 2011 AFC Cup only to miss out on a historic continental double after losing 2-1 to Uzbekistan’s Nasaf.

Spells in the United Arab Emirates and Oman followed before Talajic joined Thailand’s Muangthong United in 2014, where he still finds himself wondering about that fateful day at the start of December 2004.

“Even now, when I think about this 10 years ago, it was something unbelievable for me,” says Talajic.

“I had a chance to try and be coach of a big team in the final of a big competition in Asia, but now when I think about it, it was not a good opportunity because if we had lost, my career would have been finished.”