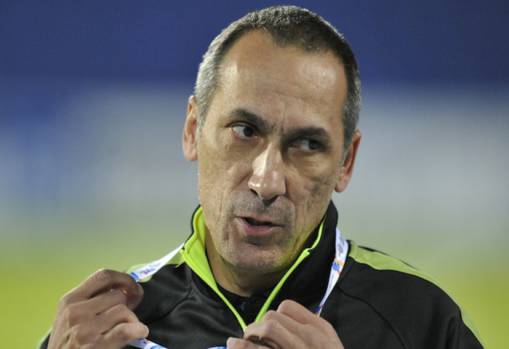 Riyadh: Georgios Donis is hoping his Al Hial side can bounce back from their domestic defeat at the hands of Al Ittihad with victory over Uzbekistan’s Pakhtakor in the 2016 AFC Champions League on Wednesday.

The Greek coach saw his team lose 1-0 to their great rivals from Jeddah in the Saudi league on Saturday, a result that means the Tigers close to within one point of table-topping Al Hilal.

“We want to improve our image after the recent defeat against Al Ittihad in the league,” said Donis (pictured), who steered Al Hilal to the semi-finals of the AFC Champions League last season.

“We know our opponents very well and the match tomorrow is very important for us as we want to win in order to improve our position in the group.

“We have a heavy schedule and we haven’t had any rest recently, Some of our players have been playing since the summer. This means that we are not at our best in terms of physical shape but we will give our best in order to win.”

The teams faced off in Tashkent on Matchday 1, sharing the spoils in a 2-2 draw in which Davron Khashimov scored in the dying minutes to ensure Pakhtakor secured a point.

“The match will be crucial because of the draw in the opening match in Tashkent,” said Pakhtakor coach Numon Khasanov, “and the two sides will be looking to get their first win in the competition.

“We want to have a good performance and get the three points, although it will not be an easy task.

“We played with an attacking approach in the previous match and we lost several scoring chances. We didn't have perfect preparation for the match as we still haven’t started our league campaign.”