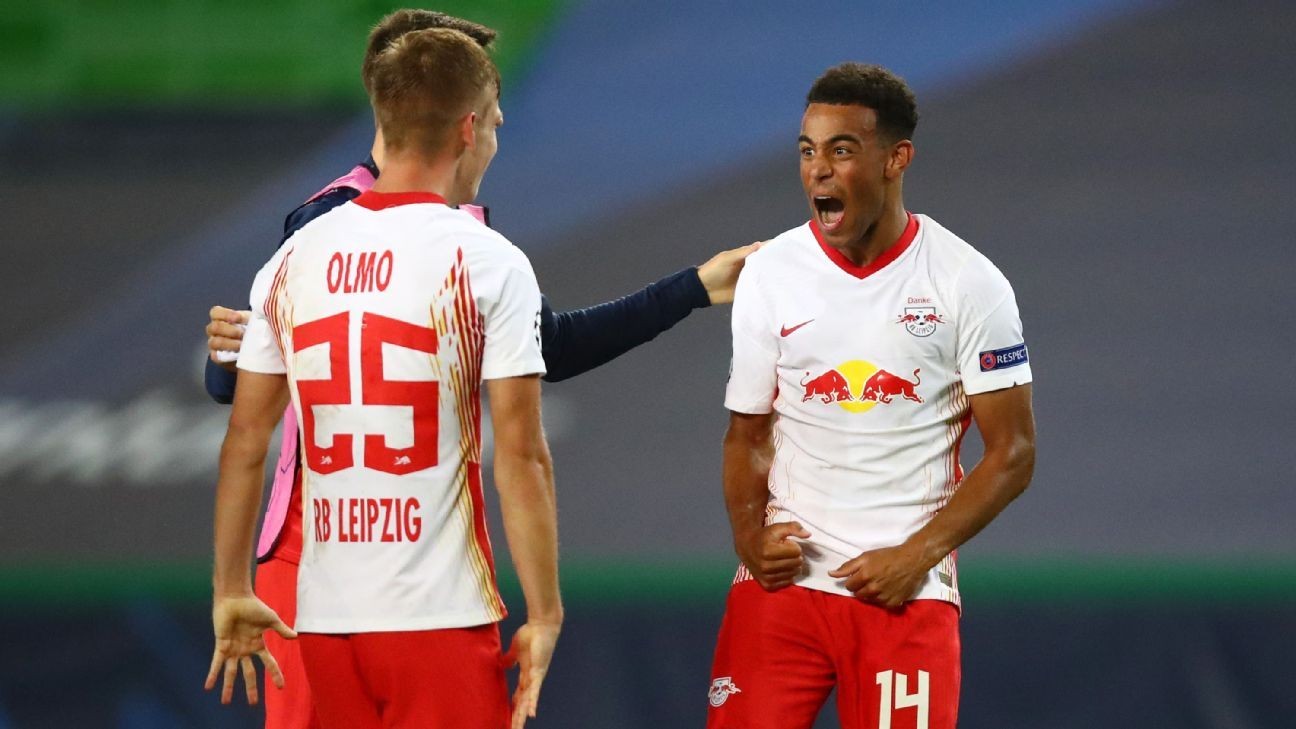 Before their Champions League quarterfinal against Atletico Madrid, RB Leipzig boss Julian Nagelsmann called on Tyler Adams and the rest of his players to step out of the shadows and embrace the blinding spotlight that used to shine on their former star striker Timo Werner.

With Werner watching his old team in his new London flat adapting to life at Chelsea -- he was mentioned more pre-match than any of his teammates -- Leipzig answered Nagelsmann's challenge. And it was United States midfielder Adams, the unlikeliest of heroes, who scored the crucial goal to guide Leipzig into their first ever Champions League semifinal, just 11 years after the club was officially formed.

Atletico were pre-match favourites -- they had the "easy" side of the draw -- but were tactically out-manoeuvred. Leipzig, in contrast, played with a wonderful fluidity; the antithesis to Los Rojiblancos' rigid style, anchored on footballing claustrophobia rather than any urgency in utilising their embarrassment of attacking riches. Atletico wanted an arm wrestle; Leipzig had their own ideas. Mark this down as a victory for the tactical mastery of Nagelsmann and affirmation for his understanding of the ebb and flow of a 90-minute match as he judged each of his substitutions to perfection.

When Joao Felix came on after 58 minutes, it looked like Diego Simeone had plucked another game-winning substitution out of the hat, after Marcos Llorente saw off Liverpool in the round of 16, played back in March. Felix found this narrow glimpse of opportunity down Leipzig's right wing, and prodded it until the damn burst and the otherwise-superb Lukas Klostermann brought him down and Felix equalised from the penalty spot.

The £113 million super-sub looked to be Atletico's ticket to the semifinals, but there was another replacement who would take the headlines. As Felix was turning the match on its head, Nagelsmann was readying his antidote with Adams standing on the touchline. The American's prime mission was to plug the Felix-shaped gap in Leipzig's defence and mark him out the game. In defence he'd switch between right wing-back to central midfield, tracking his man; in attack, well, he'd never scored for Leipzig in 28 appearances -- a job left to others. But that's no longer the approach in life after Werner.

In the midst of Adams' defensive duties came a rare attacking opportunity. The move was the embodiment of Nagelsmann's philosophy: make the transition, seize an opportunity while being football's positional equivalent of a chameleon. As he approached the edge of Atletico's box, it was the sort of space that would usually be foreign for Adams.

Why RB Leipzig is the most hated team in the BundesligaAtalanta's magic season ended against PSG, but their story's far from overBayern should smash Barcelona and Messi, but can you ever count the Catalans out?

Marcel Sabitzer threaded a pinpoint through-ball to the outstanding marauding left-back Angelino, who cut the ball back and there was Adams on the edge of the Atletico area. Adams took a touch to steady himself, and then swung his right foot through it. The ball ricocheted off Stefan Savic and past the world's best goalkeeper in Jan Oblak, Nagelsmann celebrated and Adams, looking originally more surprised than elated, was mobbed.

"I'll take it!" he said afterwards.

Adams has long been Leipzig's versatile option -- he can play anywhere across the back and midfield -- and that can be a thankless task. He's the glue in a team that rarely receives outside acclaim, but those near Leipzig say it's those sorts of players that are indispensable. Talk to those who know Adams and his performance on Thursday will come as no surprise. FC Salzburg boss Jesse Marsch, who's coached the 21-year-old for four years in both New York and as assistant at Leipzig, will tell you Adams is a coach's dream. He has this inherent understanding of the game and can read it like few others can. He's always been a game-changer in his own manner, but never one for the headlines.

But on Thursday evening, in front of the empty stands in Lisbon, seven weeks after their last competitive match, Adams answered Nagelsmann's challenge. He is one of these bright young things making their own noise in Europe for the USMNT. With Christian Pulisic at Chelsea, Weston McKennie at Schalke 04 and Giovanni Reyna at Borussia Dortmund, the national team potentially has the spine for the next 12 years. It seems like every week there is a new signature for the USMNT talent: "The first American to ..." is the new extension of their names. Now Adams is the first U.S. men's international to score in a Champions League quarterfinal. There'll be other accolades to follow.

Leipzig's challenge now is to repeat this against Paris Saint-Germain. PSG won't sit back like Atletico did; the superb Dayot Upamecano will have to find a way to mark Neymar out of the game like he did against Diego Costa. But Nagelsmann will have a plan. He'll look to Yussuf Poulsen and Patrik Schick to push and pull PSG out of position, Sabitzer to hover, Angelino and Nordi Mukiele to cross, Kevin Kampl to sit in front of their three-man defence and constantly jockey, and then he'll look to the bench to make the difference.

Even without former star striker Werner -- who scored 34 goals in 2019-20 -- Leipzig looked far more dangerous in attack, bar Atletico's addition of Felix. They have this incredible ability to switch seamlessly from formation to formation, from defence to attack and then back again. They don't get scared, it's not in their DNA.

"We're not fazed by these moments," Adams said afterward. "We keep on setting expectation, and then pass it. We're only going to get better."

This club keeps on breaking new ground, and so do its players. Adams is the perfect example of this, and on a night when there was so much focus on who wasn't in Leipzig's attack, it was the unlikely hero who stepped forward and answered the call.

No Werner? No problem.