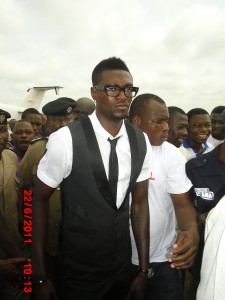 Organizers and managers of Emmanuel Adebayor's charity, Z-Sports International have revealed exclusively to GHANAsoccernet.com the Man City striker is considering getting involved with Hearts of Oak's centenary celebrations.

Adebayor, 26, would like to use his international appeal to attract world class stars to play against Ghana's oldest club here in Accra to commemorate 100 years of its existence according to CEO of Z-Sports International, Foussena Djagba.

"To commemorate Hearts of Oak's centenary we are planning to organize a match to bring some of the big names in Europe here to play Hearts," she told GHANAsoccernet.com during Adebayor's charity game in Dansoman.

"Proceeds from such a game will be handed to Hearts of Oak as a gesture from Adebayor to improve structures of the club."

The Togolese recently commissioned two water projects to serve the people of Koro and Hamile in the Upper West Region of Ghana.