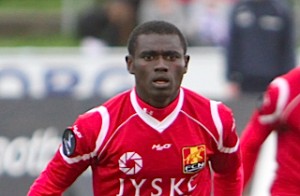 The 21-year-old says he is studying a proposal from the club after holding talks with them.

He won the Danish Premier League with FC Nordsjaelland last season and has been linked with a host of clubs in Europe.

English giants Arsenal, Odense BK, Sporting Lisbon and Club Brugge are reported to be interested in the Ghana youth player.

Adu Kofi's contract with his current club runs out in the summer and he dragging his feet on a new two-year deal.

"I have received an offer from Sporting Lisbon and I have spoken with the officials of the team," Adu said in an interview.

"We have not concluded anything yet but my agent Fabian Pivetaeu is talking to them and I hope a deal can be reached.''

Adu Kofi played for OGC Nice in France before moving to Nordsjaelland.