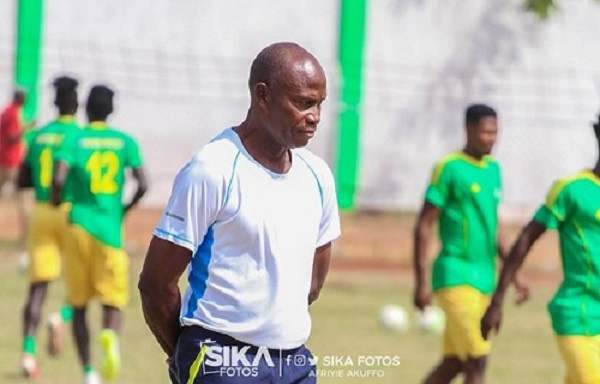 Aduana Stars coach WO Tandoh expressed his disappointment with the outcome of his side's Ghana Premier League clash with Hearts of Oak this past weekend.

The two teams battled to a 0-0 draw in Dormaa on Sunday.

In a post-match interview, Tandoh said “We are not disturbed with the draw. This is football, it changes and once you understand that you move forward. We are not offended, it’s a draw. We can also go to somebody’s home and draw. We went to Olympics and we won."

Coach WO Tandoh however, said, “he is slightly disappointed in the outcome of the game against the backdrop that they had drawn with Medeama at home”.

Responding to a question about what change in Hearts set up enabled them to hold Aduana, he stated: “you notice that they sat at the back a lot of times and waited for us to press, and each time that we pressed, we were supposed to have possessed the ball because they were playing long balls”.

“But each time we pressed on them and they played those long balls to catch us on the break because we go and they are behind.

“Those things disturbed and destabilized our game. We will prepare and make our correction going forward,” he stated.

On whether he could snatch a win on Hearts of Oak’s home ground in the return encounter, he said, “it’s my wish, but the league is tough, so we will try our best”.