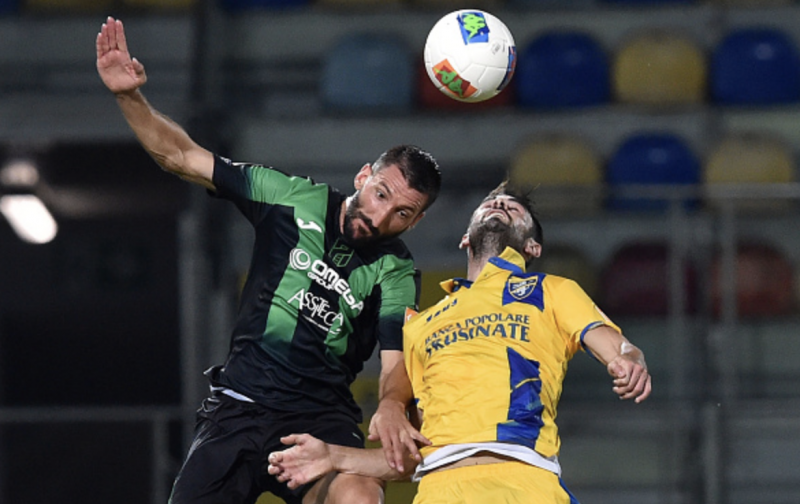 A blistering strike from substitute Luca Tremolada helped Pordenone put one foot in the Serie B playoff final with a 1-0 win away to Frosinone on Sunday in the first leg of their semi-final clash.

Both sides had their goalkeepers to thank for keeping the score down during an end-to-end second half, but Tremolada’s rocket from outside the area decided the game on the 82nd minute.

Frosinone booked a place in the semi-finals in dramatic fashion on Wednesday, as Camillo Ciano’s volley in the final minute of extra time completed a comeback from 2-0 down to win 3-2.

Pordenone, meanwhile, progressed straight to the semi-finals thanks to their fourth-placed finish in Serie B. An early Federico Dionisi shot rippled the outside of the net and had fans who had gathered in a bar outside the stadium roaring in celebration, before realising the shot hadn’t gone in.

Both sides struggled to carve open resolute defences throughout the first half and ambitious efforts from range were as good as it got, but Patrick Ciurria came the closest seconds before the half time whistle, curling a dangerous shot narrowly over after a quick Pordenone counter-attack.

Frosinone looked livelier after the break and immediately threatened when captain Nicolo Brighenti fired over from 12 yards, but the visitors responded with their best chance of the game when a superbly struck Ciurria half-volley was plucked out of the top corner by the glove of Francesco Bardi.

Fireworks began to go off outside the ground, as if to celebrate the game’s newfound excitement, and both sides came close again when Michele Di Gregorio denied a dangerous Dionisi effort with a reaction save before Pordenone broke downfield and substitute Riccardo Bocalon drilled a shot inches wide. Bardi came to the rescue again for Frosinone when Ciurria raced onto a long ball and powered a header towards the bottom corner, but the goalkeeper showed superb reflexes to get a strong hand to it.

But the keeper couldn’t do anything to stop the winner as Tremolada generated tremendous power from his left boot to launch a rocket into the roof of the net.

The hosts thought they had clinched a last-gasp equaliser when Alessandro Salvi fired a shot into the bottom corner in stoppage time, but celebrations were soon cut short as the offside flag was up.

The two sides will meet again for the second leg at the Stadio Nereo Rocco in Trieste on Wednesday.

The winner will face either Chievo or Spezia in the final, with the Flying Donkeys the favourites to progress after a 2-0 first leg win on Saturday.