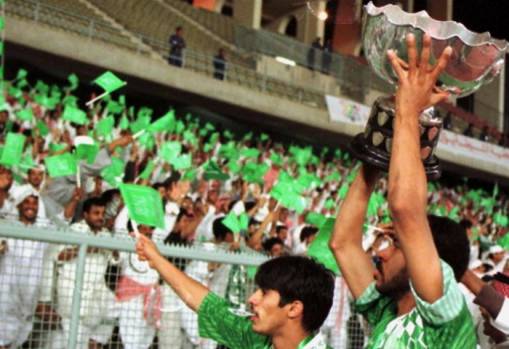 Kuala Lumpur: With this month's draw for the 2019 AFC Asian Cup's third qualifying round looming large on the horizon, join the-AFC.com as we rewind to the competition's 1996 edition which saw Saudi Arabia secure a third AFC Asian Cup crown.

Having been denied a hat-trick of continental titles by Japan at the previous AFC Asian Cup finals, Saudi Arabia were hoping that a return to more familiar territory and an impressive run to the Round of 16 at the 1994 FIFA World Cup would see them reassert their dominance as the 11th edition of Asia's flagship tournament took place in the United Arab Emirates (UAE).

The last tournament of the 20th century epitomised just how far Asia's flagship competition had evolved since its inception in 1956, with the number of participants increasing from eight to 12 teams and TV coverage hitting record levels in terms of hours and reach, with matches being broadcast in 35 countries throughout the continent.

Abu Dhabi’s Sheikh Zayed Stadium was the venue for the opening match, as the UAE came from a goal down to draw 1-1 with Korea Republic – Asia’s other representatives at USA '94 – in what was the beginning of a five-match unbeaten run for the hosts that would ultimately end on the final day.

Three days later, and after going down 2-0 to Jasem Al Huwaidi's first half brace, the UAE then rallied after the interval to defeat former champions Kuwait 3-2.

In their final group match, a 2-0 win over Indonesia ensured top spot in Group A for the UAE, before Kuwait saw off Korea Republic by an identical score line to finish second behind the hosts.

Korea Republic's failure to claim a top-two finish did not, however, end their interest in the tournament as they advanced to the knockout stage as one of the two best third-place finishers alongside Iraq, with Syria the side to miss out.

The Syrians had started their Group C campaign impressively enough, coming within five minutes of a shock victory over defending champions Japan, but an 84th minute Tareq Jabban own goal and a strike with two minutes to go from the 1992 final's hero Takuya  Takagi cancelled our Nader Jokhadar's seventh minute opener.

Japan would go on to top the table with a 100 percent record after a 4-0 defeat of debutants Uzbekistan and a narrow 1-0 win over China, who finished second on goal difference ahead of Syria and the Uzbeks who all ended their group stage campaign with three points.

While Champions Japan progressed to the knockout stage with a perfect record, the same was not the case for the 1994 runners-up Saudi Arabia who started well enough with an emphatic 6-0 Group B win over Thailand, a victory that was followed by a 1-0 defeat of Iraq before the Green Falcons went down 3-0 to Iran in a top of the table clash.

Japan duly bowed out in the last eight after Al Huwaidi's second double, and fifth goal overall, consigned the defending champions to a 2-0 defeat by Kuwait, whose reward was a semi-final clash with the UAE after the hosts edged Iraq thanks to Abdulrahman Ibrahim's extra-time winner.

Saudi Arabia also remained in the hunt with an epic 4-3 win over China, a victory would that see them renew acquaintances with Iran, who stormed in the semi-finals following a 6-2 hammering of Korea Republic.

Four of Team Melli's goals in the quarter-final romp came from Ali Daei (pictured above), but the scoring touch of the man who would emerge as on Asia's greatest striker deserted him when it mattered most, with the then 27-year-old failing to find the net in regulation and extra-time before missing in the shootout as the Saudis advanced to the final with a 4-3 win on penalties.

Daei did add another in the third-place play-off to take his personal tally to eight – the highest ever in an individual tournament – as Iran defeated Kuwait 3-2 on penalties after the score was tied at 1-1 after extra-time.

But it was the prize on offer at the conclusion of the following match that Daei would covet more than his top scorer award as hosts UAE, 1-0 conquerors of Kuwait, took on Saudi Arabia in the final.

Those present at the Sheikh Zayed Stadium witnessed a hard-fought encounter between two evenly-matched teams.

The Gulf rivals couldn’t not be separated after 120 minutes of football resulting in a shootout and for the second time in their history - after defeating Korea Republic in the 1988 final - it was Saudi Arabia who prevailed on penalties, with Khalid Al Muwallid holding his nerve to score the decisive spot-kick as the Saudis sealed the 4-2 victory to join Iran as three-time AFC Asian Cup winners.