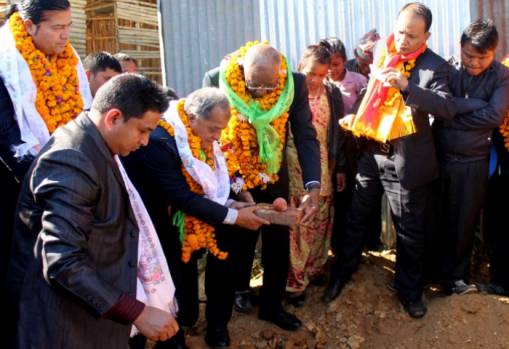 Kathmandu: After a year of planning, the Asian Football Confederation (AFC) Social Responsibility Committee Chairman Ahmed Eid Al Harbi exchanged the Memorandum of Understanding which will allow the rebuilding of the Sethi Devi Secondary School in the earthquake hit region of Sindhupalchowk in Nepal.

The project is the latest example of the AFC’s determination to provide targetted humanitarian aid where it is needed most across the continent – in line with the AFC’s Mission Statement to use Football for Social Development.

Mr Ahmed Eid Al Harbi also joined the All Nepal Football Association (ANFA) President Narendra Shrestha in laying the first brick in the project which will see the construction of two blocks consisting 18 classrooms at the school, which was at the epicentre of the 2015 earthquakes.

The school rebuilding, which is being carried out in accordance with the rules and regulations of the Nepal Rebuilding Authority and Nepal Ministry of Education, will begin in full on December 18, 2016 and has been funded by donations from the AFC and its Member Associations.

Mr Ahmed Eid said: “Sadly Asia faces many challenges – whether they be climatic, natural disasters or through conflict – but on each occasion, through the ever-growing social responsibility programmes, the AFC and its Members have responded and the rebuilding of this school in Nepal is a case in point.

“The AFC is grateful for the support from ANFA as well as the invaluable assistance and guidance of the Nepal Rebuilding Authority, the Nepal Ministry of Education, the district council, our technical advisers, the school management and of course the teachers and pupils in getting this project started.”

In the last two years, the AFC has rebuilt a village in Tacloban, Philippines, that was destroyed by a cyclone in 2014 and last week, at their meeting in Abu Dhabi, the AFC Executive Committee approved a donation to the earthquake hit region of Kumamoto for the construction of football pitches.

Mr Ahmed Eid added: “Under the banner of One Asia, One Goal, the AFC has shown a determination to use football for social development – with not only the projects in the Philippines, Nepal and Japan but also with the distribution of the ultra-durable balls through a scheme with our long-term partners One World Play Project, which has benefitted more than 1.5 million children in Asia.”

The Ultra-Durable Ball Project, in conjunction with One World Play Project, was awarded the gold medal for the Best Social Responsibility Project at the Sport Industry Awards Asia held in Bangkok in October.