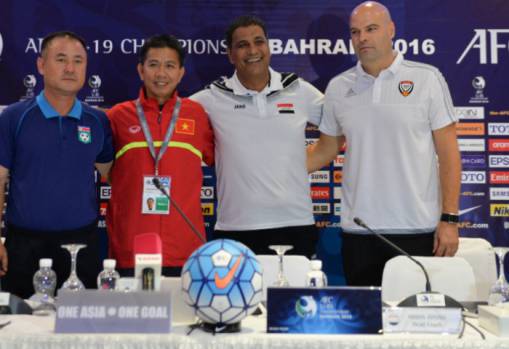 Manama: Ri Song-ho is setting his sights on steering DPR Korea one step further at the AFC U-19 Championship in Bahrain as his side attempt to overcome the disappointment of losing out to Qatar in the final two years ago.

DPR Korea have been drawn in Group B of this year’s championship and will kick off their campaign against Vietnam on Friday before facing off against Iraq and the United Arab Emirates later in the competition.

“In the last edition of the AFC U-19 championship in Myanmar we played in the final with Qatar, but we lost to Qatar and we were the runners up,” said Ri, whose nation was defeated thanks to a solitary goal by Akram Afif.

“So we have gained a lot of experience during the last championship and that helped us prepare for this tournament. We are hoping to play better and show better results in this tournament.

“Over the last few years we have been successful in different age group championships, so we have a lot of responsibility and we will try our best in this championship too.”

DPR Korea will meet Vietnam in their opening game of the competition at Khalifa Sports City Stadium on Friday evening, and Vietnamese coach Hoang Anh Tuan knows his team go into the championship as one of the outsiders.

“We have Iraq, UAE and DPR Korea so it means we are the weakest team in this group, but for us it’s a challenge,” he said. “I think we have a good chance in this tournament and we are proud to be one of the 16 best teams in Asia. We will try to do our best in this tournament.”

Iraq, meanwhile, will take on the United Arab Emirates and the country is seeking to complete an Asian youth championship double having won the AFC U-16 Championship in India last month.

“I hope it will be a good omen for us to get success in this tournament and the main goal is to qualify for the U-20 World Cup,” said coach Abbas Atiyah.

“We hope to have a great championship here in Bahrain and all the teams in this group are all good teams, the Emirates have speed and are a good team with talented players and a good coach.

“DPR Korea have won a lot of championships and have had good results in the previous season and Vietnam is going to be competitive this season, so I wish everyone the best for this competition.”

UAE coach Jakub Dovalil is hoping is side can dispel any early tournament nerves when they take on an Iraqi side the Czech admires, and he is hopeful his team can build upon their run to the quarter-finals of the previous edition of the competition.

“I think Iraq is a strong team because they qualified in the other category to the Olympic Games in this region,” he said.

“They play very well and have had good results and we must concentrate on our own performance and be ready to do the best in the first game. So I accept that in the first game, the opening game, maybe we will be a little bit nervous, but I think we are well prepared.

“I think the whole group is a very composed group, each team can qualify for the quarter-finals. Two years ago we were a little unlucky to lose in the quarter-final to Myanmar and we would like not to repeat that.

“We respect all of our opponents, we have respect for them and I think it will be a nice tournament and naturally we will try to go step by step.”