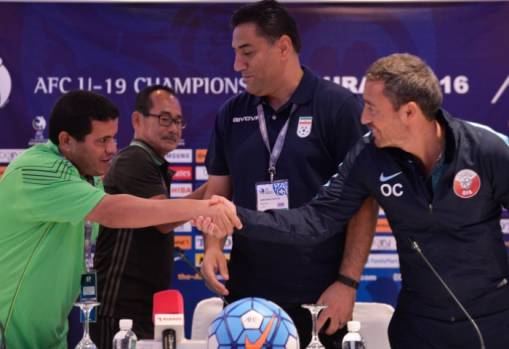 Manama: Coach Oscar Moreno is confident that defending champions Qatar can once again impress at the AFC U-19 Championship Bahrain 2016 as they prepare to take on Islamic Republic of Iran in their Group C opener at Bahrain National Stadiumon Friday.

Two years ago in Myanmar, Qatar beat DPR Korea 1-0 in the final to claim their first-ever AFC U-19 title.

The young Maroons are back in the thick of it this year after an impressive qualifying campaign, finishing top of their group after three consecutive wins and 13 goals scored.

“We are pleased to be here and ready to play in this tournament,” said Moreno.

“This group is very balanced and every team has a chance to reach the next round.

“There are really high expectations on us obviously but we have a lot of confidence in our team and expect to reach the knockout stage, qualify for the semi-finals and make the U-20 World Cup.”

MEET ALL THE TEAMS

Meanwhile, Islamic Rrepublic of Iran, who won the tournament four consecutive times between 1973 and 1976, are determined to improve on their group stage finish from 2014 after a flawless qualifying stint that saw them rack up three wins and score 15 goals without reply.

“This team has no injuries and is physically and mentally ready,” said coach Amir Peiravani.

“Qatar, our opponents, are one of the best teams in the competition but we aim to give the best performance we can.

“Tomorrow we hope for good football, fair play and a good result for Iran.”

TAKE A LOOK AT ALL THE GROUPS & FIXTURES

“This is a short tournament so the first match is important,” said Japan coach Atsushi Uchiyama.

“We hope to play aggressive football and win as many games as possible and try to do well in this tournament.

“Yemen have a team that are technically skilled and fast paced, so we need to be prepared but we are determined to qualify.”

Mohammed Al Nufiay’s Yemen team finished second in their qualifying group behind Saudi Arabia thanks to twin 1-0 wins against Syria and Turkmenistan.

“We have prepared ourselves for many stages,” said Al Nufiay.

“Everyone knows about the problems and conflict in Yemen but we hope to do well and inspire the people back home.”