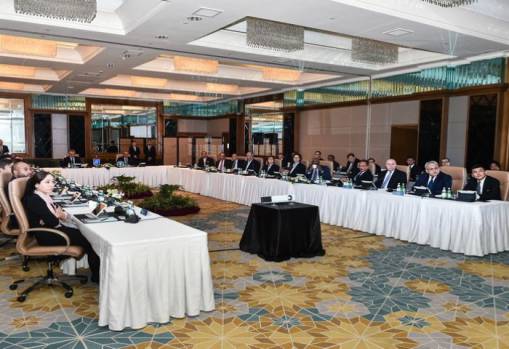 United behind the sentiment of ‘One Asia, One Goal’, the AFC Executive Committee also pledged to further strengthen ties with other football bodies.

AFC President Shaikh Salman bin Ebrahim Al Khalifa said at the meeting in Kuala Lumpur: “Our stated ambition is to increase engagement with the billions of potential football fans across this continent, as well as becoming the world’s leading Confederation.

“The AFC will continue to work closely with other Confederations – strengthening our links with CAF, CONCACAF, UEFA and OFC as well as building on the understanding we have with other key stakeholders.

“We must work harder than ever at the AFC to sustain the momentum Asian football is gathering on the global stage. However, we need, as we said in the Vision and Mission, to make our teams stronger so we can close the gap on world football powerhouses.

“That must be our focus in the coming months and years.”

The AFC Executive Committee also named Abu Dhabi, the capital of the United Arab Emirates, as the host of the AFC 2016 Annual Awards night in November. This will be the second time Abu Dhabi has hosted the Annual Awards – the other being in 2006.

The Executive Committee offered its congratulations to Japan, Korea Republic and Iraq (men), as well as to China PR and Australia (women) in qualifying for the Rio 2016 Olympic Games.

Shaikh Salman said: “Asia’s strength in women’s football has been demonstrated by the performances of China PR and Australia and we are seeing the gap between the top five women’s teams closing rapidly.”

The AFC President added: “Asia’s quality in futsal was also evident with IR Iran, Uzbekistan, Vietnam, Korea Republic and Australia all qualifying for the men’s FIFA Futsal World Cup in Colombia, while special congratulations must go to IR Iran for winning the event.”

The Executive Committee also approved decisions by the Audit, Development, Finance and Marketing Committees who met in Kuala Lumpur this week, including the issuing of tenders for two development projects - for data collection/management and live streaming. It also received an update from the Governance Reform Task Force, who met in February.