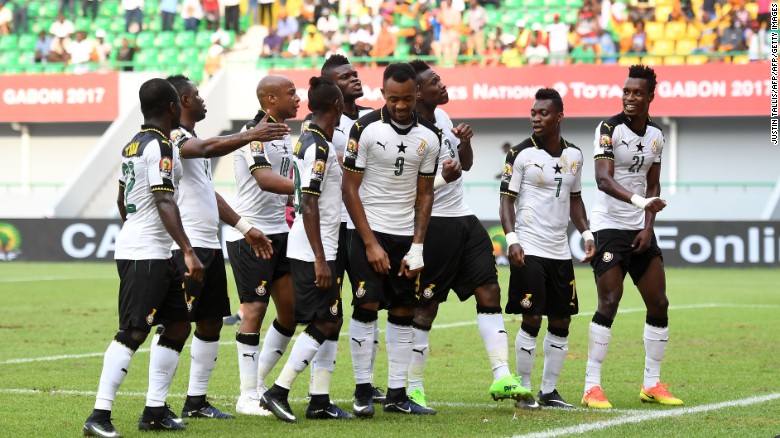 (CNN)Ghana danced its way into the Africa Cup of Nations quarterfinal thanks to a hard-fought win over Mali in the coastal city of Port-Gentil.

After heartbreak at the end of an epic penalty shootout against Ivory Coast two years ago, the Black Stars will now have their sights set on ending a 35-year barren run in Africa's most prestigious competition.

Saturday's match mirrored Ghana's opening round victory over Uganda, as Avram Grant's side dominated for large spells but could count itself somewhat fortunate to come away with all three points.

Fresh from his man of the match performance against Uganda, Christian Atsu was once again the outstanding player in the first half.

The Newcastle loanee's victim this time around was Mali's Hamari Traore -- a clever nutmeg took Atsu past the left-back and his low cross found the Ayew brothers in the box.

However, there was no telepathic understanding between siblings, as Andre contrived to prevent Jordan a simple tap-in and scuffed his own effort wide.

It wasn't long, though, before Ghana's dominance paid dividends.

One long free-kick forward was controlled exquisitely by Jordan Ayew. The Aston Villa forward then whipped a delightful cross into the box for captain Asamoah Gyan to head home his 49th international goal.

The Ghanaian players huddled together and performed their trademark choreographed celebration, much to the delight of the group of Black Stars supporters gathered behind the goal.

Jordan Ayew continued to be a thorn in Mali's side, flitting around outside the penalty area and this time testing Oumar Sissoko with a shot of his own.

Bakary Sako appeared to be the only Mali player with any attacking endeavor. The Crystal Palace winger was relentless in tormenting Ghana right-back Harrison Afful, though any quality end product was at a premium.

Manager Alain Giresse's half time team talk had its desired effect, as Mali began the second period with a greater sense of urgency.

Sako's inviting cross towards the far post was met by Moussa Marega but he could only head straight at Razak Brimah, before blazing a close-range effort over the crossbar just minutes later.

Yves Bissouma -- a half time substitute -- provided a much-needed injection of quality and Mali dominated for large periods of the second half.

Only a combination of poor finishing and reflex saves from Brimah denied Mali an equalizer, as Sako followed up his poor free-kick with a volley that stung the palms of the Ghanaian stopper.

Ghana becomes only the second team to qualify for the quarterfinals, joining Senegal as the only two teams with a perfect record so far.

Once the kings of AFCON with three successive titles between 2006 and 2010, Egypt failed to qualify for any of the subsequent three editions.

After comfortably topping its qualifying group this time around, coach Hector Cuper has set his sights not only on lifting the trophy, but also reaching the 2018 World Cup in Russia.

Although a last minute Abdalla El Said goal gave Egypt a win over Uganda Saturday, the Pharaohs will have to improve if they are to go deep in this competition.

The 'Egyptian Messi' was certainly living up to his nickname and looked a class above the rest of the players on the field.

This time comfortably shaking off the advances of Hassan Wasswa, Salah clipped an inviting ball across the face of goal but an absence of Egyptian attackers inside the box saw another chance go begging.

In a rare foray forward, Tonny Mawejje -- Uganda's best player in the defeat to Ghana -- broke between Egypt's lines but dragged his shot harmlessly wide of Essam El Hadary's goal.

Otherwise, Uganda's best chance came off an Egyptian boot. Joseph Ochaya's teasing cross was awkwardly sliced away from goal by Ahmed Hegazy, affectionately dubbed "the Alessandro Nesta of the pyramids."

Teenager Faruku Miya -- Uganda's star outfield player -- had been anonymous so far, but thought he had provided the assist for a Uganda opener early in the second half.

The Standard Liege midfielder put the ball on a plate for Ochaya, but the 23-year-old had strayed several yards offside before turning the ball past El Hadary.

For all their huffing and puffing, Egypt's Pharaohs rarely troubled Denis Onyango in the Uganda goal, despite the domestic African Player of the Year struggling with a knee injury for much of the second half.

Uganda, meanwhile, continued to attack with verve and its confidence grew as the match wore on. The ever lively Ochaya drew the loudest cheer of the night from the crowd after evading two Egyptian defenders with some audacious keepy-ups.

But for all their attacking intent, Uganda's players ultimately had their hearts broken. 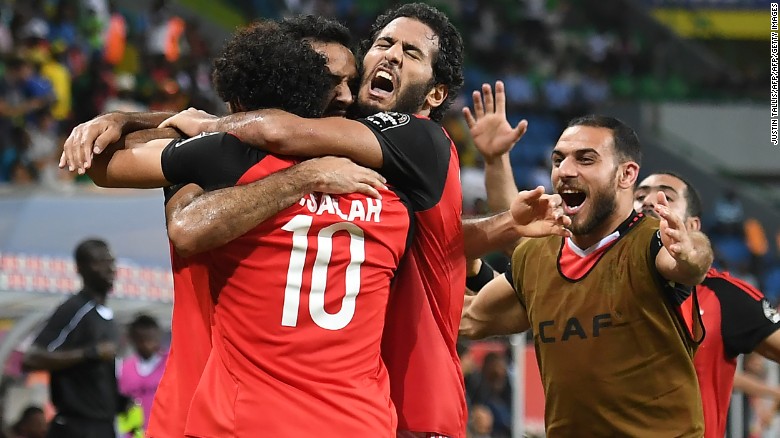 A poor delivery into the box prompted a rapid Egyptian counter-attack, which culminated in Salah cleverly holding the ball up before laying it into the path of El Said to fire through Onyango's legs.

It was a sickening way for Uganda's tournament to end, but this young group of players certainly has plenty to look forward to.

Egypt, on the other hand, knows a draw against the already qualified Ghana will guarantee it passage through to the quarterfinals.