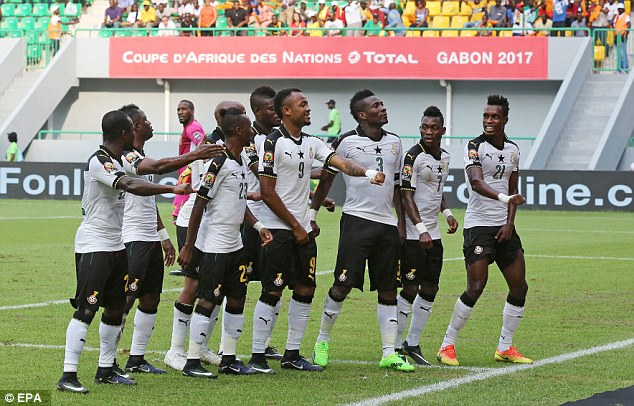 With only one set of group games left in the Africa Cup of Nations, only two of the last 16 have already been decided.

Ghana and Senegal, the only two sides to have won both their games, are in the quarter-finals, while six other teams will join them over the next four days.

And in a remarkable open tournament, only one side have so far been eliminated. So how can everyone else make it through? Sportsmail takes you through the permutations. Who is through? No-one quite yet.

Who is out? None of them either. It’s a very open group.

Cameroon are in a strong position, and only need a point from their final game against Gabon to be sure of progress. In fact, the only way they can go out is if they lose and Burkina Faso beat Guinea-Bissau.

Gabon will be through if they win, regardless of the other result. If they lose they are out, but a draw could still put them through, as long as the other game is also a draw and they score more. Burkina Faso will also be through with a win, and will be out with a defeat. Like Gabon, a draw might be enough, but it would all come down to goals scored between them and the hosts.

Guinea-Bissau must win their final game. Even if they do that, it won’t be enough if Gabon also beat Cameroon, because their head to head with the Indomitable Lions is poor.

If both games end with the same score draw, lots will be drawn between Gabon and Burkina Faso to determine who goes through.

Who is through? Senegal, and they are already guaranteed top spot

Who is out? No-one yet, but Algeria are on the brink

Tunisia need just a point to guarantee their place in the quarter-finals. Unless they lose to Zimbabwe, they’ll be through. Zimbabwe would join Senegal in the last eight if they beat Tunisia, and Algeria fail to win against Senegal. If both Zimbabwe and Algeria win, it comes down to goal difference.

Algeria need to beat Senegal AND hope that Zimbabwe beat Tunisia. But they don’ t want the Warriors to do too well. If Zimbabwe win by two goals more than Algeria do, the Desert Foxes are going home.

Who is through? No-one.

Who is out? No-one, though Togo need something special

DR Congo are top of the group with four points, and only need a point against Togo to ensure they go through. A win would guarantee top spot. Even if they lose, they would still make it into the quarter-finals in second place if the other game is drawn.

Morocco are definitely through with a win or a draw against Ivory Coast, because they lead Togo on head to head, and definitely out if they lose. Ivory Coast must beat Morocco - managed by their former coach Herve Renard - to go through. If they do, they will definitely be in the last eight, but whether as winners or runners up will depend on the other result. Only a DR Congo win would deny them the top spot.

Togo are hanging on by a thread. They must win and hope the other game has a positive result. A draw in either game puts them out.

Who is through? Ghana are guaranteed their place in the last eight

Who is out? Uganda

Ghana can secure top spot if they don’t lose against Egypt. They are already sure of their place in the quarter-finals

Egypt will join the Black Stars if they avoid defeat. A win would see them top the group, a draw and they finish second. If they lose, and Mali win they could go out. Mali need to beat Uganda, and hope Egypt lose against Ghana. If both of those happen, it comes down to goal difference, because the two drew their head to head fixture.

Uganda are out, without a point from their first two games.