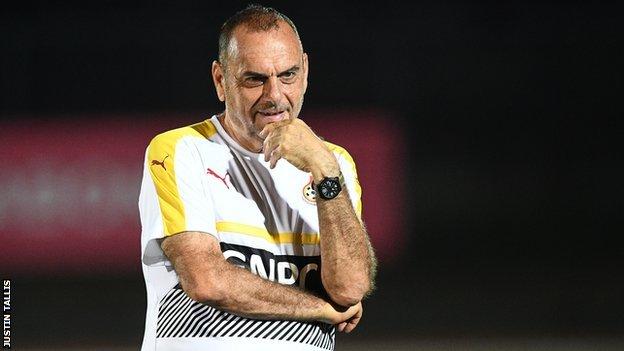 Ghana coach Avram Grant has called for Africa Cup of Nations organisers to allow teams to replace players who have suffered injuries because of the state of the pitches in Gabon.

The Black Stars have lost left-back Abdul Rahman Baba to a serious knee injury suffered in the first half of Ghana's 1-0 win against Uganda on Tuesday.

The pitch in Port-Gentil, where Ghana are based, was in particularly bad condition and Egypt lost goalkeeper Ahmed El Shennawy when he went off in their 0-0 draw with Mali at the same venue.

Sherif Ekramy has also been sidelined so Egypt currently have only one fully fit goalkeeper, while Gabon and Burkina Faso have each had two players ruled out of the rest of the tournament since their 1-1 draw in Libreville on Wednesday.

"The main actors are the players and we need to give them the stage to perform well," said Grant at a press conference on the eve of his team's second Group D game against Mali.

"Five injuries so far have been down to the pitch. The organising committee should change the rules to let teams replace players who got injured due to the pitch.

"Two of Egypt's goalkeepers got injured due to the pitch. It is not their fault and not fair to them.

"We cannot change the pitch now so let Egypt bring in another goalkeeper.

"They cannot stay with one 'keeper, even if we have to play against them, it's not sporting."

Egypt and Ghana will meet in their final group game in Port-Gentil next Wednesday.

Before that, the Egyptians take on Uganda on Saturday evening with 44-year-old Essam El Hadary ready to start in goal after breaking the record for the oldest player ever at the tournament when he came on against Mali.

"The rules are clear. If something happens we know you can't do anything. I would like it if we could but we can't," said Egypt coach Hector Cuper when asked if he agreed with his Ghanaian counterpart.