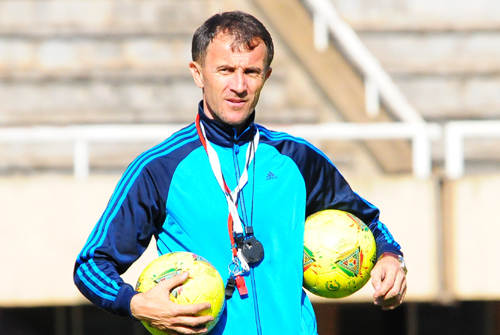 Andre Ayew first half penalty won the game 1-0 for Black Stars at Port Gentil to condemn The Cranes to an opening defeat in the 2017 Africa Cup of Nations.

Speaking in the post-match press conference, Micho stated his side did everything right but failed to get a good result.

“We have done everything to get a good result and this has been a great lesson for us,” said Micho. “We showed we are capable to play against the best. I congratulate Ghana who are always a top team,” he added.

The Uganda Cranes coach still believes the boys will do a commendable job against Egypt in the next match and hopes the return of defender Murushid Jjuuko and midfielder Khalid Aucho will add something to the team.

“We will have two key players back from suspension and I believe we can do better against Egypt.”

The Cranes were average in the opening half of the match at Port Gentil and the Serb admits that stage fright had an impact on the performance after 39 years absence from the competition.

“We haven’t been here for 39 years. In the first half, we had what I call stage fright. We committed a mistake that I cannot explain and Ayew scored. At halftime, we needed to awaken the players so that they believe we can play in tournaments like this.”

At one point in time, the 1978 finalists threw everything at Ghana with Micho introducing attack minded players on the pitch as the side searched for a leveller.

“We made a risk at the latter stages playing 3-2-5 but it didn’t work. I am very proud of my team and will not look for individual mistakes. My team has shown that we have the technical and physical ability but we still have to work more. We will play against giants Egypt and Mali and we will make sure to give 200% of our efforts.”

Uganda’s qualification for the finals in Gabon was viewed by many as a fluke on the continent given the absence of giants Nigeria, Zambia and South Africa.

However, the tactician insists the match showed the side didn’t qualify by mistake.

“We came with a mission to prove that we didn’t qualify by accident, and I believe we showed that. We showed that we can play even for more than 90 minutes. But sometimes there are some naive mistakes maybe because of the pressure of being a goal down. I have learnt that at this level of competition we cannot make silly mistakes like what we’ve done and we will not do that against Egypt and Mali.”

Uganda must avoid defeat against Egypt on Saturday in their next match to have a chance to reach the last eight.