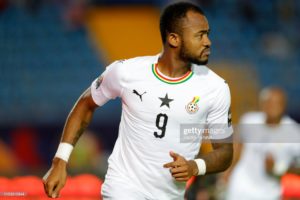 Ghana's forward Jordan Ayew celebrates after scoring during the 2019 Africa Cup of Nations (CAN) Group F football match between Guinea-Bissau and Ghana at the Suez Stadium in the north-eastern Egyptian city on July 2, 2019. (Photo by FADEL SENNA / AFP) (Photo credit should read FADEL SENNA/AFP/Getty Images)

Ghana captain Andre Ayew has jumped to the defense of striker Jordan Ayew after his below-par performance in the Black Stars win over South Africa in the opening match of the 2021 Africa Cup of Nations qualifier on Thursday.

Ghana got off their 2021 AFCON qualifying campaign on a bright note after recording a comfortable 2-0 victory over the Bafana Bafana at the Cape Coast Sports Stadium.

The West Africa powerhouse had a superb start to the game where they enjoyed most of the possession before Thomas Partey opened the scoring with a speculative long range drive in the 35th minute.

Kwesi Appiah's side wrapped up the three points with ten minutes to end the game through substitute Kudus Mohammed. The FC Nordsjaelland ace took his chance very well after a solo effort and wrote his name in gold with a beautiful curler.

The team's top striker Jordan Ayew has been faced opprobrium following his underwhelming display in the match.

However, Andre has leapt to the defense of his sibling who he believes will become a better player by learning from his mistakes.

"We demand a lot from him. He is our striker and he has to keep going, working. He has to try and do mistakes and he'll try again. That is the game, that's the only way we are going to not stop a striker from shooting. Sometimes if we feel it's wrong we will tell you. If it is whoever it is on the pitch we'll tell you but at the end of the day we need players that will take initiatives."

"He managed to do it two three times, we'll not complain because we need initiative. If we want to score goals we need to take initiative though sometimes it may be too much but we have to make mistakes. We will also go and watch the game again for sure and see what he did right and wrong, coach will also add his."

"We will work on our good and bad side, and we'll prepare for Monday. We have done half of the job and Monday is important because we need that three points also."

Jordan will hope to redeem himself when the Black Stars take on Sao Tome and Principe in the second group game on Monday, November 18.