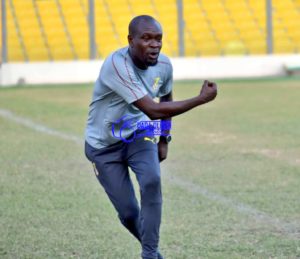 Head coach of the Black Stars Kwesi Appiah has hailed the influence of his deputy CK Akonnor in team's win over South Africa on Thursday.

The former Hearts of Oak and Asante Kotoko gaffer was on the bench when the Black Stars brought smiles to the faces of Ghanaians following their 2-0 win over South Africa in the first match of the 2021 Africa Cup of Nations qualifier against South Africa at the Cape Coast Sports Stadium.

Goals from either half by Thomas Partey and substitute Kudus Mohammed were enough for the four-time Africa champions to see off the Bafana Bafana.

Speaking at his post-match presser, coach Appiah shared the glory with his assistant trainer CK Akonnor whom he believes did much of the work during the match.

"If you a head coach and you're out there sometimes your mind goes somewhere, sometimes you must be looking at three or four players who are not playing well so this is where you need your assistant to assess the game because he knows the game plan and he knows our players so he might sit down and come to you and let you know that coach...why can't you look at this because it's a problem for us."

"So it is important to link up well with your assistant so that anytime he has to sit down quietly and assess the game and give information as to what to do. There is so much to do out there as a coach but he does much of the work for you."