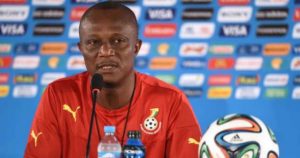 Head coach of the Black Stars Kwesi Appiah has indicated that he needs time to prove himself with the team.

Appiah, 59, was heavily criticised following the Black Stars' underwhelming display at the 2019 Africa Cup of Nations in Egypt where the team got eliminated at the Round of 16 stage by Tunisia on penalties.

Despite his contract his ending in December, most Ghanaians want Kwesi Appiah sacked immediately as many believe he is not fit for the job.

"I personally think I always do the best that I can. I may not be the best but I think when given the chance I will always make sure I prove myself," he told the media in Cape Coast on Thursday.

Ghana made a flying start to the 2021 Africa Cup of Nations qualifiers after defeating South Africa 2-0 at the Cape Coast Stadium yesterday.

A goal apiece in each half from Thomas Partey and Kudus Mohammed ensured the Black Stars pick up the maximum points at home.

The team will now travel to São Tomé and Príncipe to play them on Monday in their second Group C fixture.