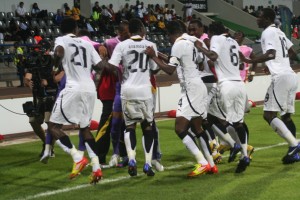 The co-host recorded their third straight win at the continental event by dispatching North African giant Tunisia 1-0 with Pierre-Emerick Aubameyang scoring the decisive goal in the second half.

With a cracking home advantage at their disposal, many Ghanaian soccer fans believe the Black Stars must beat the Guineans to avoid meeting the surprise package at this yearâ€™s tournament.

The former Black Stars coach insists the Gabonese could pose a major threat to our title ambitions.

"If you look at how the Gabonese have played so far, theyâ€™re very dangerous and so I will we try to avoid them at the quarter-final stage," Afranie told Accra-based Happy FM

"They're very strong and in such tournaments, home advantage counts. We have a good team who are capable of doing anything but at the moment I think we must win our game against Guinea."

Ghana beat hosts Angola 1-0 at the quarter-final stage at the last edition.