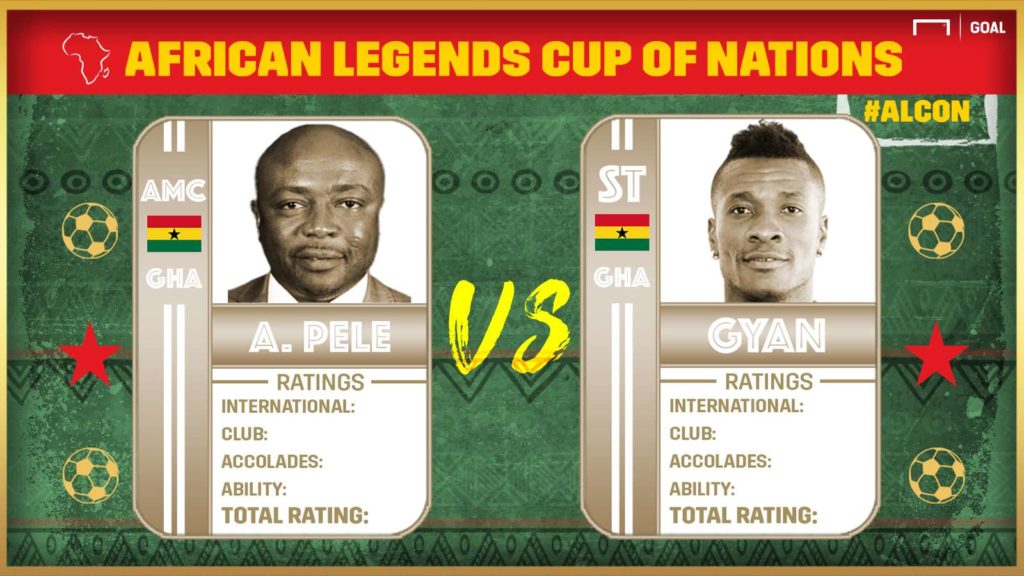 It’s a Ghanaian derby in the First Round of the African Legends Cup of Nations this Friday evening.

One of the most fascinating match-ups of the African Legends Cup of Nations when the draw was conducted threw up an all-Ghanaian derby between Abedi Pele and Asamoah Gyan.

These two deserve to be considered alongside the likes of Robert Mensah, Baba Yara, Edward Aggrey Fynn and Ibrahim Sunday as some of the Black Stars’ finest players, but who will progress to the Round of 16?

It's a Ghanaian derby in the African Legends Cup of Nations this evening, as Abedi Pele 🇬🇭 clashes with 🇬🇭 @ASAMOAH_GYAN3

Which of these two will progress to the Round of 16? 🤔#ALCON pic.twitter.com/SMqO0xg9Hq

Despite never winning the Africa Cup of Nations, Gyan scores particularly highly here. In fact, his score of 23 is one of the highest in the Alcon, even though a case could be made that he underachieved in African competition.

Despite reaching two Afcon finals, he never lifted the big one, but did make the semi-finals at least in each of his first six tournament appearances—a remarkable run of consistency.

He is also Africa’s all-time top scorer at the World Cup—stepping up in some of the biggest games in the country’s history, against the likes of Czech Republic, the United States and (partly) Uruguay.

He is the Black Stars’ all-time record appearance holder and their top scorer, both remarkable achievements considering the quality the national side have been able to call upon over the years.

Despite winning the Nations Cup in 1982—his first appearance at the finals—Pepe wouldn’t feature in the next four editions, before returning to reach the final again in 1992.

He conquered the continent once, but it’s a disappointing return for a sensationally talented player who also never reached the World Cup.

Club Career This is one area where Gyan falls short. Despite scoring in Ligue 1, Serie A and the Premier League during his early 20s, his decision to move to Asia before his peak means that he never tested himself at the highest level during his prime.

He picked up national and regional silverware aplenty with Al Ain, but unlike some of the other big names in the Alcon, he never secured major honours in the European theatre.

Pele, by contrast, was a European champion with Olympique de Marseille, proving himself to be a key man in the finest team of the season in the grandest competition of them all.

History undermined—to an extent—the achievements of that fine OM team, but Pele was also part of the team who won French titles in 1991 and 1992.

These two were widely decorated—individually—for their achievements at club and international level, with Pele winning the African Player of the Year award on three occasions.

He was also named in the Brazilian Pele’s Fifa 100, and was named Afcon Player of the Tournament in 1992, as Ghana reached the final.

While Pele certainly clinches it in terms of peak achievements during those glorious years in the early 90s, Gyan has the edge in terms of longevity.

As noted, he stands alone both as Ghana’s record appearance maker and their all-time top scorer, while, like Pele, he was also a BBC African Footballer of the Year on one occasion, and finished runner-up for the Caf prize once.

He won five Golden Boots in club competitions during his career—testament to his consistency—and made Caf’s Team of the Year on three occasions.

A big game player, he made the Nations Cup Team of the Tournament twice, and only Sammy Kuffour has won the Ghanaian Footballer of the Year award on more occasions.

Ability Pele, one of the elite African players of all time, scores very highly in the ‘ability’ section, and there are only four players in our African Legends Cup of Nations who have a better score than his 23/25.

He was nicknamed ‘The African Maradona’ early in his career, primarily for his dribbling skills, ability, close control and pace, although he was also inventive as well, capable of moments of magic to settle big matches.

His performance against AC Milan in the Champions League final were evidence of a truly World Class talent, and his work alongside Jean-Pierre Papin and Chris Waddle is still fondly remembered in Provence.

Gyan, while a fine goalscorer and an excellent physical specimen, belongs a level or two below the truly top class African talents.

Perhaps this explains his decision to move to Asian football so early in his career.

No doubt, he was an immense big game player, but injuries certainly began to take their toll during the last half-decade.

Overall Rating This one is tighter than many would have expected, with Gyan’s overall body of work at club and international level ensuring for a competitive contest against Pele.

The elder Ghanaian may have reached far higher levels during the early 90s, and won the Nations Cup in 1982, but his peak was relatively brief and he never got the chance to showcase his qualities at the World Cup.

Gyan was part of the Ghana team that reached the World Cup quarter-finals in 2010, and while he failed to win the Nations Cup, he did reach the semi-finals six times and the final twice.

Ultimately, Pele’s immense natural ability—as Africa’s best player of the early 90s—takes him through to the Last 16.