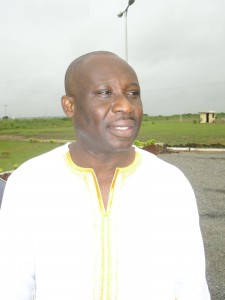 New Ghana U-20 management Committee chairman, George Afriyie has promised to return the nation to its past glory.

The Black Satelites, seen by many as the bedrock for the senior national team, the Black Stars has been shambolic since winning Africaâ€™s first World Cup in 2009.

The teamâ€™s ailing was epitomized at the African Youth Championships earlier this year in South Africa where they failed to win even a single game, resulting in the teamâ€™s inability to defend the crown won in Egypt.

Afriyie however believes he is the man to revive the team's fortunes but conceded he must first identify the problems responsible for the massive decline over the past two years.

"First of all i need to sit down with my predecessor and see what went wrong in South Africa because we all had hope in that team," he exclusively told GHANAsoccernet.com.

"We knew they were going to do well considering what they achieved in Egypt but then it didn't happen so i first need to find out what was responsible for that.

"We are yet to pick a coach for the team and the chairman always have a major input in that regard but we want to implore the same criteria used in selecting the Black Stars coach since the U-20 team is now the grooming ground for the senior team and therefore needs a very competent person to man that area."

Asked whether his committee should be seen as a failure if Ghana fails to make any headway in that division, Afriyie replied: "Sometimes you cannot just brand the management committee as a failure if they had provided all the needed logistics for the team to succeed.

"Maybe if the coach or the players fail to deliver it will be unfortunate to blame the management committee butÂ of courseÂ we also have to takeÂ someÂ sort ofÂ responsibilityÂ in that regard.

"But I promise you, I believe in working instead of talking. What has happened in the past will guide me to see how best to have a formidable team therefore I will not wait for the team to fail before I come out, I will make sure to make the public aware the very moment something goes wrong."